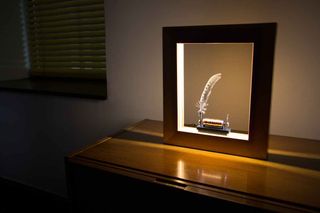 Can a picture frame slow time? This one appears to.
(Image: © Jeff Lieberman)

Have you ever wished that you could speed up time, slow it down, or stop it entirely? Maybe we all have, but unless you have Hermione Granger's Time Turner, the ability to control the clock's hands is probably not in your toolbox.

However, an invention called the "Slow Dance" frame opens a window into what it might look like to see things move in slow motion in the real world.

When you place them in the frame, delicate objects such as leaves and feathers quiver and undulate, as you might expect them to when they're stirred by a gentle breeze. But there's a subtle difference — the movements appear to happen at a fraction of their normal speed, taking place right in front of your eyes. [The Most Amazing Optical Illusions (and How They Work)]

Let's do the time warp

Jeff Lieberman, the creator of "Slow Dance," is no stranger to slow motion. He formerly hosted the Discovery Channel program "Time Warp," a science-themed show that used high-speed cameras to film everyday actions, capturing up to 40,000 frames per second (a normal camera's shooting rate is typically 30 frames per second). Using extreme slow motion, the show explored dynamic physics principles that were demonstrated by a diverse range of activities — from explosions to body piercing.

Lieberman recognized that watching things happen in slow motion creates a sense of wonder, and allows the viewer to appreciate the beauty of movement — something that they might miss if they were watching it in real time, he said in a statement.

But could he take that sense of wonder from watching slow motion on a screen, and recreate it in reality? Lieberman decided to find out.

Lieberman unlocked the secret of the slow-motion illusion he created in "Slow Dance" by using strobe lights that blink at a rate that's too fast for the human eye to register. The pulsing lights flicker on and off 80 times per second, and are synced to vibrations that animate whatever object is suspended within the frame. While the light pulses are too fast to see, they combine with the high-speed vibration to imperceptibly vary the sequence of moving images, changing how they reach the eye and creating an illusion of movement that seems to be happening more slowly than normal.

"It creates a weird juxtaposition where everything in front of your eyes confirms the reality of this thing, but every other experience in your life has said that this is impossible,” Lieberman said in the statement.

Lieberman crafted the first version of "Slow Dance" as a wedding gift for two friends who happened to be dancers; they inspired him to create an object that captured the feeling of paired, graceful movement in a shared space. Enthusiastic responses from people who saw it in action prompted him to make the frame more widely available, through a campaign on Kickstarter.

The "Slow Dance" wooden frame measures 12.5 inches (31.8 centimeters) wide by 14.5 inches (10.2 cm) high. Lightweight objects can be attached to springs within the frame, and are illuminated by recessed lighting. Variable controls allow users to cycle between different "frame rates," changing the motion patterns of the objects as they move.

"This piece is a metaphor for all the unseen aspects of reality" that are affecting us all the time, Lieberman said in the same statement. "It expresses a desire to remind myself, and anyone who uses it, that there is something beyond what we see with our senses" he added.

The Kickstarter campaign for "Slow Dance" launched on Aug. 15 with a goal of raising $70,000, and backers have been anything but slow in their response. As of Sept. 7 — with six days to go — total pledges amounted to more than five times that original amount, reaching over $440,000. The product is expected to ship in early 2017, with "Slow Dance" slated to appear in stores by late 2017 for $299.