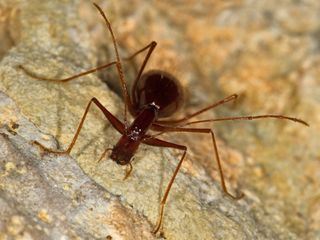 The cave beetle A. cylindricollie has long legs like a spider.
(Image: © Dragiša Savić)

Spelunkers in a Serbian cave may stumble across what appear to be spiders living on the rock walls and ceilings, but it turns out that some of these "spiders" are actually beetles, according to a new study.

New research reveals two new species of these spindle-legged cave beetles while also upending the creatures' family tree. The study, based on molecular analysis of the cave beetle DNA, created a new genus, Graciliella, which contains at least four species of the beetle.

The study was led by Iva Njunjić, a cave biologist at the University of Novi Sad in Serbia. Serbia, Montenegro, Croatia and nearby Balkan nations sit atop multiple cave systems, which are home to a variety of bizarre cave-adapted organisms. One example is the European cave salamander, or olm, a blind and colorless creature that navigates its environment through smell, touch and the detection of magnetic fields. [Creepy Crawlies & Flying Wonders: Incredible Cave Creatures]

Cave beetles evolved from above-ground ancestors that looked like average, plump-bodied, short-legged beetles. The cave-adapted animal, though, has no eyes, no wings and no color. Its legs and antennae are extremely long, because the beetles compensate for the lack of eyesight with touch. These long appendages, combined with a fat hind part of the body that may help store fat during times of famine, give cave beetles their spidery appearance.

Because most animals that live their entire lives in caves develop similar characteristics — pale bodies, no eyes — it can be hard to discern subtle differences between species, the researchers said. So, Njunjić and her colleagues turned to molecular analysis to detect genetic differences between cave beetles collected in Montenegro, Bosnia and Herzegovina, and Croatia. Their results revealed that species assigned to the genus Anthroherpon actually descended from more than one common ancestor. Thus, the researchers spun off a new genus, Graciliella, containing species found in Montenegro and Croatia.

The genus gets its name from the graceful appearance of the long-legged beetles. Four species belong in the genus so far, including two new ones: Graciliella kosovaci and Graciliella ozimeci. Each looks quite similar to the naked eye, but the researchers found subtle anatomical differences, such as in the genitals. (Genitals tend be a good way to tell species apart, because genitals have to be compatible to allow for successful mating.)

It's not uncommon for a Graciliella species to exist only in a single cave, according to Njunjić and her colleagues. The beetles get hydration and nutrients from water seeping into the caves from above, meaning the insects are very vulnerable to water pollution.

The research was published Tuesday (Aug. 30) in the journal Contributions to Zoology.