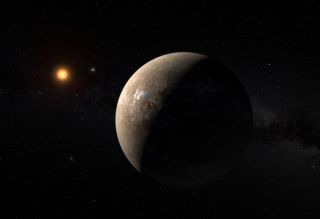 The discovery of a potentially Earth-like planet in the habitable zone of our closest star, Proxima Centauri, raises one of the greatest mysteries of science: Is there life beyond our world — and if so, could the Proxima system be a place to find it?

"The big questions are, how much is it like our Earth, and does it have life? Those are the questions that everyone wants to know," said Seth Shostak, a senior astronomer at the SETI Institute, which is dedicated to the search for life in the universe. "Is there anybody there? And to answer that question is not easy."

Shostak told Live Science that the first indications of even a potential for life on the newly discovered planet, dubbed Proxima b, would likely come from spectroscopic analysis of the alien world — that is, if astronomers can ever directly observe Proxima b. [8 Most Intriguing Earth-Like Planets]

"So far, no one has seen it — they've measured a very slight wobble, about the speed at which you walk ... that tells you there's a planet there, and tells you something about its mass, but it doesn't tell you anything about the conditions on the planet," Shostak said.

A single pixel-size image of the planet from an Earth-based or space telescope would be enough to glean valuable insights about the planet, he added, such as if it has an atmosphere or oceans, and if the atmosphere includes gases that could be the result of living metabolisms in an alien biosphere.

"Just as a 1-pixel dot, that's all you need — because if you have light hitting 1 pixel, you take that light and you put it through a prism, essentially, and you look for oxygen or methane, or something else that would tell you that there's something biological going on there," Shostak said.

But he added that these efforts aren't likely to happen anytime soon, because existing telescopes don't have such capabilities yet.

"I think people will undoubtedly make an effort, but it's going to be very, very hard," Shostak said.

If Proxima b is confirmed in orbit around our nearest star, conditions on the planet are certain to be very different from conditions here on Earth, said planetary scientist Athena Coustenis, director of research for the National Centre for Scientific Research (CNRS) of France at the Meudon Paris Observatory, and chair of the European Science Foundation's space exploration committee.

"It's not the same kind of star as we have in our own solar system, so that has a few implications — and most of them are negative [for life], although there are some positive implications," Coustenis told Live Science.

She said the main problem is that Proxima Centauri is a red dwarf star, which means it is much smaller and dimmer than our sun. As such, the "habitable zone" around Proxima Centauri, the just-right area around a star where liquid water could exist on a planet's surface, is much closer to the star than Earth is to the sun.

This likely means that Proxima b is tidally locked, with one side always facing the star, Coustenis said. "So on one side, you will have high temperatures, and on the other side it is very cold," she added. "And the question is: Can it maintain an atmosphere?"

Red dwarf stars also go through periods with strong solar flares and magnetic storm activity that could scorch any planets in close orbits and make the evolution of life very difficult, she said. [Video: Proxima Centauri's Alien Planet Closer Than You Think — With Right Spacecraft]

"I think it would have to be a different kind of life than we have on our own planet, because it would need to emerge and to develop under very different conditions," Coustenis said.

She thinks the best chances for life in the Proxima system may be on the moons of Proxima b, if there are any, because these moons would not be tidally locked to the star.

"Hypothetically, if I could get there, I would drill, which is what we are doing currently on Mars, and it's also what we are planning to do with space missions currently being developed for icy moons," Coustenis said. "I would look under the surface, because I think the conditions at surface level around a red dwarf are really complicated for the planet to develop life."

Voyage to the stars

But if signs of life are discovered in the Proxima system, what could we do about it? Could humans ever send a probe to the planet?

Shostak said it would take a conventional spacecraft traveling at around 36,000 miles per hour (58,000 km/h) — the speed of the New Horizons probe that launched in 2006 on a mission to Pluto and the Kuiper Belt — around 75,000 years to reach the Proxima Centauri system. "And by that point, your funding is gone, I think," he added. [Warped Physics: 10 Effects of Faster-Than-Light Travel]

Even though Proxima is the closest star to Earth, it is still 4.2 light-years away, which is equivalent to about 25 trillion miles. While this may seem like an unthinkable distance, it may not be entirely out of reach, said Ian Crawford, a professor of Earth and Planetary Science at Birkbeck College in London in the United Kingdom.

Crawford told Live Science there could be some possibilities for space travel at higher speeds, at least for robotic spacecraft; although he is an advocate of human space exploration, Crawford concedes that the distances and durations involved with interstellar travel make a human voyage unfeasible.

Nuclear-fusion rockets have been proposed as one way to travel to other star systems. One such concept design, known as Project Daedalus, would emit a stream of small hydrogen bombs that detonate behind the ship, propelling it forward.

Crawford said Project Daedalus was designed to reach 12 percent of the speed of light, which means a voyage from Earth to Proxima Centauri would take about 40 years.

But he added that the technological capacity required for such a spacecraft is far beyond anything available today, and the cost of development would be immense. Such a mission might be possible over a time scale of around 100 years, he said.

Another possibility could be to use solar sails, such as the tiny laser-powered LightSail spacecraft proposed earlier this year by the Breakthrough Starshot project.

But Crawford said that idea also presents serious technical challenges, such as finding a way for the cellphone-size probes to transmit data back over the enormous distance to Earth.

If scientists are able to find proof of alien life on Proxima b, and they are able to send a spacecraft to the planet, what would it mean for humanity on Earth? [Greetings, Earthlings! 8 Ways Aliens Could Contact Us]

"I think the implications of finding an independent origin of life anywhere in the universe would be very important," Crawford said. "This is why we're sending space probes to Mars and studying the outer moons of our own solar system."

And finding proof of life elsewhere in the universe would have ripple effects that reach far beyond the scientific community, he added.

"Beyond the merely scientific implications, there are a lot of social implications from the new perspective that the discovery of life around another star would give to our place in the universe," Crawford said. "At the moment, it's just a question, and we don't have the answer to it — when and if we get an answer to it, I think that will be quite profound."

For one, it would demonstrate that the emergence of life is not a miracle unique to Earth, Shostak said.

"I think that from the philosophical point of view — set aside all the biology and other scientific implications — the philosophical import would be very substantial: sort of like being in Europe in 1492 and learning of the existence of a New World," Shostak said.

Coustenis added that any discovery of life in the universe — even if it's evidence of past life — would be "mind-blowing."

"It would turn around all kinds of scientific models and put everything into perspective in a very different way," she said. "Whether life is found in the solar system or outside it, to me it's the same thing. And either a positive or negative result would have huge implications for what we understand about the emergence of life."