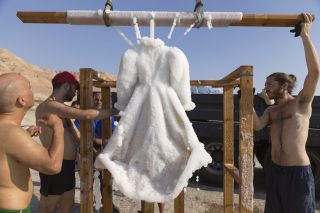 A new piece of artwork by Sigalit Landau shows what happens when objects are submerged in the salty waters of the Dead Sea. The sparkly salt sculpture shown here was originally a black dress that was submerged in the Dead Sea for two months. People can view the exhibit at the Marlborough Contemporary until Sept. 3, 2016.
(Image: © Matanya Tausig )

A gorgeous new exhibit reveals just how salty the Dead Sea is.

Artist Sigalit Landau submerged a 1920s-style long, black dress in Israel's Dead Sea for two months in 2014. When the dress was lifted from the salty waters, it was a sparkling, crystalline sculpture formed from salt. The images capturing this chemical transformation are now on exhibit at the Marlborough Contemporary museum in London, England, until Sept. 3.  [See Images of the Salt Crystal Wedding Dress]

Landau has been inspired by the Dead Sea's unique environment for past artwork, including salt-crystal-encrusted lamps, a salty hangman's noose and a crystalline island made of shoes, according to the artist's website.

The current exhibit uses a dress that is a replica of the long, black one worn by a character in the classic Hasidic Jewish ghost-story called "The Dybbuk." In that story, the bride, Leah, is possessed by the evil spirit of her dead suitor, who died before they could marry. The dress was worn during the 1920s production of the play.

"Over the years, I learnt more and more about this low and strange place. Still, the magic is there waiting for us: new experiments, ideas and understandings. It is like meeting with a different time system, a different logic, another planet. It looks like snow, like sugar, like death's embrace; solid tears, like a white surrender to fire and water combined," Landau said in a statement.

The Dead Sea is one of the saltiest bodies of water on Earth. At 34 percent salnity, it is several times saltier than the open ocean. And the Dead Sea is getting even saltier: Every year it drops by about 5 feet (1.5 meters) as water in the lake evaporates. The water's hypersalinity makes it denser than ordinary water, which is what allows people to float. [The Surprisingly Strange Physics of Water]

The hypersalinity is also what's behind the alchemy that transforms the black dress into a shining white dress. Salt tends to crystallize out of very salty solutions, and it typically nucleates, or seeds, at places that have saltier concentrations than the surrounding water, according to a 2012 article in the Journal of Physical Chemistry Letters. The initial salt-crystal nucleus still contains a fair amount of water, but as more salt gets deposited and the crystal grows, that water diffuses out of the crystal matrix, according to that article.

As the dress initially caught bits of extra salt, that led to a locally higher concentration of salt, spurring the salt molecules to line up into crystals that eventually grew and transformed this deathly dress into a sparkly saline jewel.