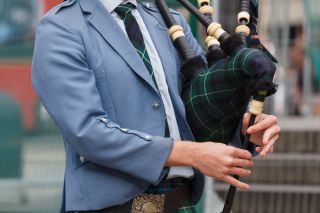 One man's fatal lung infection highlights a rare danger that musicians may face: getting sick from fungi growing within their instruments, according to a recent report of the case.

The 61-year-old man developed what his doctors in England described as "bagpipe lung," and died just a month after he was hospitalized for his infection, according to the case report, published today (Aug. 22) in the journal Thorax.

The man had previously been diagnosed with a lung condition called hypersensitivity pneumonitis, in 2009, the doctors who treated him wrote. But that condition can have many causes, and at that time, it was unclear what was causing the case, according to the report. [Here's a Giant List of the Strangest Medical Cases We've Covered]

Hypersensitivity pneumonitis is characterized by inflammation in the air sacs in the lungs; it starts when the immune system reacts to some "trigger," said Dr. Jenny King, a physician trainee in respiratory medicine at the University Hospital South Manchester in England and the lead author of the report.

To lower the inflammation, doctors treated the man with drugs that suppressed his body's immune response. However, it wasn't until he visited a different clinic in September 2014 with worsening symptoms that doctors connected the man's condition to his hobby: playing the bagpipes, according to the report.

Indeed, a major clue was that the man, who told the doctors he played the bagpipes daily, said that several years earlier his symptoms had briefly disappeared, when he went to Australia for three months and did not bring his bagpipes, King said.

Hypersensitivity pneumonitis can be easy to treat if it's caught early and the patient avoids the trigger, King told Live Science. This appears to be what happened when the man went to Australia, according to the report.

However, after the man returned from his trip, he resumed playing the bagpipes, and his symptoms returned, according to the report. If hypersensitivity pneumonitis isn't treated, the air sacs of the lungs can become scarred, and then oxygen can no longer pass through these sacs to get into the bloodstream, King said.

When the man came to the clinic in 2014, he told the doctors that he had had a dry cough for the past seven years and was increasingly out of breath, according to the report. In addition, the man said he used to be able to walk more than 10 kilometers (6.2 miles), but could currently walk only about 20 meters (66 feet) before he felt he had to stop. He was hospitalized because his symptoms were getting worse, according to the report.

During this time, the doctors took samples from the man's bagpipes and found that at least seven different types of fungi were growing in the moist environment within the pipes, according to the report.

Unfortunately, the man died about a month after he was admitted to the hospital, due to his worsening symptoms, the doctors wrote.

A warning to musicians: Keep your instruments clean

Bagpipes are not the only culprit in cases of hypersensitivity pneumonitis; indeed, other instruments have been implicated as well. [4 Unusual Ways Music Can Tune Up the Brain]

For example, other case reports have highlighted the condition in a saxophone player (in that case, it was deemed "saxophone lung") and a trombone player.

Any instrument that has a mouthpiece could harbor fungi and lead to hypersensitivity pneumonitis, King said. A person can get sick even if he or she doesn't inhale while using the instrument, because the fungal spores circulate throughout the instrument, she said.

But there's no need for musicians to pack up their instruments — regularly cleaning them is the best way to prevent "bagpipe lung," King said.

While the medical literature doesn't describe any "gold standard" for cleaning musical instruments, one study suggested taking the instrument apart, cleaning each piece with a solution of disinfectant and water, and letting the pieces drip dry, King said. It's also important to regularly clean the instrument case and to store the instrument in a dry environment, she added.