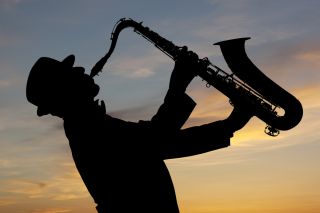 A man in Atlanta has been diagnosed with a severe case of saxophone lung. Though the name of the condition seems odd, it's quite appropriate, since saxophonists, clarinetists and other wind-instrument players are among those who contract the illness most often.

Doctors were confounded by the man's persistent coughing and wheezing, which lasted about a year and didn't respond to antibiotics, steroids or other treatments, NBC News reports. Then, he mentioned in passing that he played the clarinet in a Dixieland jazz band.

When researchers from Emory University in Atlanta examined the man's clarinet and reed, they found a rich mass of Exophiala, a fungus usually found in decaying wood and soil. "There was very impressive fungal growth on those," Dr. Marissa Shams of Emory University told NBC. "Basically, he was kind of breathing in this fungus." [Microscopic Worlds Gallery: Fascinating Fungi]

The man had also developed an allergic reaction to two other fungi, Alternaria, a common allergen that causes opportunistic infections in people with compromised immune systems, and Curvularia, a soil fungus usually found in tropical regions.

There are a wide range of toxic molds that can cause saxophone lung (sometimes referred to as hypersensitivity pneumonitis, or HP): In a 2010 report in the medical journal Chest, researchers noted that Ulocladium botrytis, Phoma, Fusarium, Penicillium and Cladosporium molds are commonly found thriving in the warm, moist environment inside wind instruments.

And they can be deadly: A well-known bagpiper from Wiltshire, England, was hospitalized for weeks in 2012 due to a near-fatal infection of Rhodotorula and Fusarium molds that originated inside his bagpipes. Because his pipes, like most others available today, are made of synthetic materials that don't require cleaning as much as older models made of animal hides, mold and bacteria can build up undetected for months.

Indeed, a lack of regular instrument cleaning seems to be the root of most cases of saxophone lung. In a 2010 editorial in Chest by Dr. Yvon Cormier, she noted that "it is quite likely that the problem [of sax lung] has existed for many years because of the cleaning habits of many musicians. Upon consultation of a few saxophone players, I was surprised to learn that most only brush-clean their instruments, and in some cases, only once or twice a year. Washing with a chlorine solution or isopropyl alcohol was never mentioned."

In the case of the Atlanta clarinetist, his condition improved markedly after he started sterilizing the instrument regularly. "We were happy to help him," Shams told NBC. "This is not the typical allergy and asthma patient that we see in our clinic."