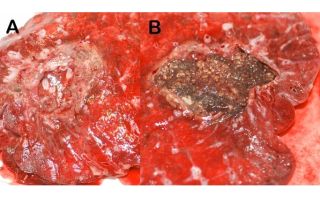 A man whose bloody cough wouldn't go away was surprised to learn he had a giant ball of fungus in his lung.
(Image: © BMJ Case Reports)

A man who suffered from a bloody cough that persisted for more than a year was surprised to find that the cause was a giant ball of fungus growing in his lung, according to a recent report of his case.

The man, a farmworker in Italy, may have contracted a fungal infection, called aspergilloma, while working in the fields. For a year, he struggled with not only the cough but also fever and weight loss. His symptoms hadn't improved despite several courses of antibiotics, according to the report published Oct. 24 in the journal BMJ Case Reports.

Aspergilloma, a fungal infection that mainly infects the lungs, is relatively uncommon, and this particular clump of fungus was extremely large, at nearly 3 inches (7.6 centimeters) wide.

"My experience is very large, and it's the biggest I've ever seen," said study co-author Dr. Marcello Migliore, a thoracic surgeon at the University of Catania in Italy.

Aspergilloma enters the lungs through the respiratory tract. It creates a cavity inside the lungs, and then a ball of fungus grows inside that space. The fungus typically infects people with suppressed immune systems or lung problems such as tuberculosis. If left untreated, aspergillomas can cause pneumonia and death, Migliore said. [7 Devastating Infectious Diseases]

When the 42-year-old farmworker, a chronic smoker, initially came to see doctors, he had lost 77 pounds (35 kilograms) over the previous a year. Despite taking antibiotics for several months, the man's symptoms worsened.

A computed tomography (CT) scan revealed a 2.75-inch by 2.5-inch (7 cm by 6.5 cm) "vegetative" mass in the left upper lobe of his lung. Depending on whether the man was lying down or sitting up, the position of the lesion moved.

Still, the doctors didn't know at that point what was causing the cavity, though the CT scans did reveal a suggestive halo around the lesion that is a signature of the fungus.

"When there is a large cavity like that, medical therapy does not do anything, so we must remove it," Migliore told LiveScience.

When Migliore performed the surgery, he realized it was a large ball of fungus — the biggest he had ever seen. [Image of the fungus]

When the doctors followed up with the man 16 months after the surgery, they found he had improved greatly, and no longer had any troublesome symptoms.

"Now that half of the lung is away, things are going well, he is now happy," Migliore said.