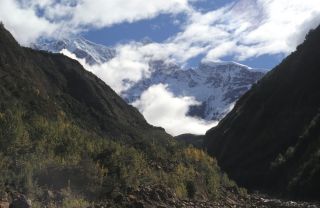 In a region that boasts the tallest peak in the eastern Himalayas and a body of water so impressive it has been nicknamed the "Everest of rivers," an enormous canyon has been carved through the rock over the course of millions of years.

This imposing landscape is the result of powerful erosion and dramatic tectonic activity, but the interactions between the surface and interior processes in this part of the Himalayas have been the subject of major debate among scientists. Now, a new study provides evidence that a patch of extreme rock-uplift in the eastern Himalayas — the area of greatest tectonic activity — has been slowly migrating northward, drifting rather than remaining anchored to the location of river erosion, as researchers had previously theorized.

"Of course, you get feedback between surface processes and tectonics, but our data says the surface processes do not control the tectonics in this area," said study lead author Georgina King, a geologist at the University of Cologne in Germany. [Photos: The World's Weirdest Geological Formations]

To calculate the movement, researchers used a cutting-edge mineral-dating technique called optically stimulated luminescence (OSL) thermochronometry. As common minerals like quartz and feldspar move away from the Earth's hot center, they cool. And at temperatures specific to each mineral, they begin trapping electrons, the researchers said. So, until the traps are filled, a chunk of bedrock can tell scientists how recently that rock reached certain temperature milestones, which correspond to depths below ground. That information, in turn, can be translated to tectonic rates of exhumation, or how quickly rock is moving toward the surface.

The researchers combined older data with a new analysis of samples from eight spots within the region, known as the eastern Himalayan syntaxis, to model a "continued migration of tectonic structures towards the northeast."

"The beauty of the technique is it gives you resolution at timescales that we didn't have previously," Noah Finnegan, a geologist at the University of California, Santa Cruz, who was not involved in the study, told Live Science.

The process can date rocks within thousands of years of accuracy, back to around 200,000 years ago. "That'll have applications for almost anywhere in the world," he added.

Finnegan was the lead author of a 2008 study, published in the Geological Society of America Bulletin journal, which looked at the same region and noted the overlap in area of the most erosion and highest rates of rock uplift. That study proposed that the powerful river influences the tectonics by weakening the surface rock, allowing greater uplift in a "tectonic aneurysm."

The new study provides an alternative form of mineral-dating, and another piece of evidence on the tectonic side of the debate over the geological history of the region. "This present paper shows that bull's-eye [of uplift activity] is moving in time, and importantly, the location is moving away from the river that we argued is responsible," Finnegan said.

In other words, the shared location of intense erosion and uplift is "coincidence rather than causative," King told Live Science.

The new study's conclusions are "acceptable," George Mathew, a geologist at the Indian Institute of Technology Bombay in Mumbai who was not involved with the new research, told Live Science in an email. But the eastern Himalayas is just one region.

The new findings were published today (Aug. 18) in the journal Science.