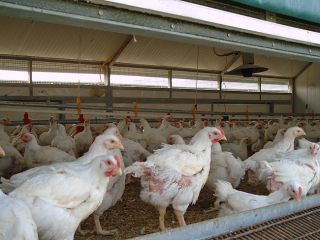 Editor's Note: This occasional series looks at powerful ideas — some existing, some futuristic — for fueling and electrifying modern life. Chicken feathers may help cars use hydrogen fuel in the future. The feathers would not be the fuel, but they could help store it, new research reveals. Hydrogen, the most common element in the universe, has long been touted as a clean and ample energy alternative to fossil fuels. When hydrogen reacts with oxygen, instead of yielding pollutants as fossil fuels do, it simply generates water. Unfortunately, hydrogen is hard to store and transport. Hydrogen vehicles currently keep it in tanks in either liquid or pressurized gas form. As a pressurized gas, it takes up roughly 40 times as much space as gasoline, and as a liquid it needs to be kept at extremely low temperatures. "Using currently available technology, if you had a 20-gallon tank and filled it with hydrogen at typical room temperature and pressure, you could drive about a mile," said researcher Richard Wool, director of the Affordable Composites from Renewable Resources program at the University of Delaware in Newark. So far scientists have been striving to engineer ways to store hydrogen gas aboard vehicles at reasonable pressures and temperatures to significantly reduce the costs of a hydrogen infrastructure. However, the materials under investigation, such as carbon nanotubes and metal hydrides, are often very expensive. Now Wool and his colleagues say that superheated chicken feather fibers could hold vast amounts of hydrogen. They first looked at chicken feathers because they are extraordinarily cheap — the United States alone generates some 6 billion pounds of the feathers per year. "It actually costs the poultry industry money to get rid of these feathers, so they're basically for free," Wool told LiveScience. Chicken feather fibers are mostly composed of keratin, the same protein found in nails, scales, claws and beaks. When carefully heated for precise times to specific temperatures, the carbon-rich surfaces that result on the fibers attract hydrogen, somewhat like how activated charcoal filters can pull out impurities from liquids or gases. The heating process can also form hollow tubes between the fibers, strengthening their structure, and make them become more porous, boosting their surface area and thus their capacity to store gas. One can then pump gas into the fibers and store it at high pressure, and to release the gas, one just depressurizes it or raises the temperature. The spongy, porous structures of these feathers can hold as much or perhaps more hydrogen than carbon nanotubes or metal hydrides. They would also prove far cheaper — using carbonized chicken feathers would only add about $200 to the price of a car, Wool said, while making a 20-gallon hydrogen fuel tank that uses metal hydrides could cost up to $30,000, and one that uses carbon nanotubes could cost $5.5 million. "When we started we didn't know how well carbonized chicken feathers would work for hydrogen storage," Wool said. "Carbonized chicken feather fibers have the potential to dramatically improve upon existing methods of hydrogen storage and perhaps pave the way for the practical development of a truly hydrogen-based energy economy." Wool estimated that when using carbonized chicken feather fibers to store hydrogen, it would take a 75-gallon tank to go 300 miles in a car. His team is working to improve that range. In addition to hydrogen storage, Wool and his colleagues are working on ways to transform chicken feather fibers into a number of other products, including hurricane-resistant roofing, lightweight car parts and bio-based computer circuit boards. Indeed, other researchers have suggested that chicken feathers could become common in clothing in the future. "Living organisms can provide perfect properties for various daily applications," said researcher Erman Senoz at the University of Delaware in Newark. Wool, Senoz and their colleagues will detail their findings on June 23 at the Green Chemistry & Engineering Conference in College Park, Md. The research was funded by the U.S. Department of Agriculture Cooperative State Research, Education and Extension Service.