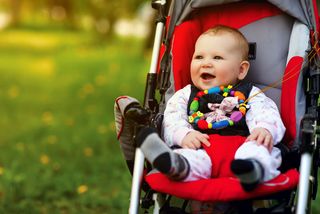 About two U.S. children visit the emergency room every hour for injuries related to being in a stroller or an infant carrier, a new study finds.

Overall, more than 360,000 children ages 5 or younger went to the ER for stroller- or carrier-related injuries from 1990 to 2010, the study found. That's more than 17,000 injuries a year. Many of these injuries happened when children fell out of a stroller or carrier, or the product tipped over. There was also a sharp rise in the proportion of concussions and traumatic brain injuries tied to strollers and carriers.

"While these products are used safely by families every day, when injuries do occur they can be quite serious," study co-author Kristi Roberts, a research associate in the Center for Injury Research and Policy at Nationwide Children's Hospital in Ohio, said in a statement. "The majority of injuries we saw were head injuries, which is scary considering the fact that traumatic brain injuries and concussions in young children may have long-term consequences on cognitive development."

The researchers used a national database of emergency room visits to look for injuries associated with strollers or carriers. Carriers included devices that adults can wear to carry the child (such as a Baby Bjorn carrier), along with handheld carriers (such as baby-carrying baskets) and carriers that detach from a stroller.  [9 Weird Ways Kids Can Get Hurt]

Most of the injuries (39 percent for strollers, and 48 percent for carriers) were soft tissue injuries, such as bumps and bruises. But about a quarter of stroller injuries, and 35 percent of carrier injuries, were concussions or traumatic brain injuries (TBIs), the study found.

For carriers, nearly 30 percent of injuries happened when the product tipped over.

To reduce the risk of stroller- or carrier-related injuries, the researchers recommended the following:

The new study is published online today (Aug. 17) in the journal Academic Pediatrics.