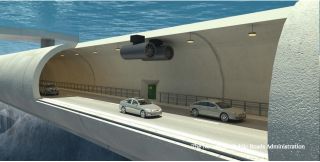 Geographically speaking, Norway is an especially tricky place for motorists. With more than 1,100 fjords — the deep glacial water inlets that divide land masses — driving from point A to point B typically requires points C through Z, several bridges, and a couple of ferry rides.

To remedy the problem, Norway is undertaking an ambitious project to build a fully submerged floating traffic tunnel beneath the waves of the Sognefjord, a troublesome body of water that runs 3,000 feet wide and 4,000 feet deep.

The tunnel would be the first of its kind in the world, and it solves a number of problems that have otherwise stymied public planners. For one thing, certain geographical features around the Sognefjord make suspension bridges or even traditional floating bridges impractical. Bridges are also subject to damage from Norway's famously rough weather.

Underwater tunnels also have the distinct advantage of keeping the waterway clear for commercial ships and — particularly important on the Sognefjord — Navy vessels. The depth of the fjord prohibits conventional tunnels, but a suspended underwater passageway would split the difference nicely.

This is no pipe dream, either. (Well, it is.) Norway has already committed $25 billion in funds toward the project. If all goes according to plan, the Sognefjord tunnels will be completed by 2035.

Then, depending on the success of the initial structure, additional floating tunnels will be considered for other problem areas within Norway's unique road grid. Planners say that if the long-term models and computer simulations hold up, underwater floating tunnels could cut north-south cross-country drive time in half, from 22 hours to 11 hours.