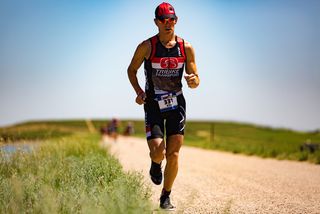 People who are competitively active — such as college athletes or those training for an Ironman event— typically work out several hours a day.

Elite athletes will need to eat closer to 65 percent of their calories from carbohydrates to maximize their performance, said Asker Jeukendrup, a sports nutrition scientist at the Gatorade Sports Science Institute, who has done some of the pivotal studies on carbohydrate usage and athletic performance.

"If your goal is to just make it to the finish line, your need isn't going to be that high. You probably don't need to do too much differently on the day before," he said. "If you really want to run a fast time, then it's a slightly different story. You can probably benefit from increasing your carbohydrate intake one or two days before, and maybe even three days before" a race, he said.

Immediately after a grueling workout, elite athletes can benefit from consuming a beverage that has about 20 grams (0.7 ounces) of protein and a small quantity of carbohydrates, such as a carton of chocolate milk, according to a 2010 study in the International Journal of Sport Nutrition and Exercise Metabolism. A 2013 review in the Journal of the International Society of Sports Nutrition found that consuming carbohydrates and protein immediately in the "post-workout" window maximized the snacks' benefits, especially for people lifting weight to the point of muscle failure, or doing other intense resistance training.

Elite athletes will also need more protein overall in their diets, experts said. A 2016 study in the American Journal of Clinical Nutrition looked at men who endured a grueling weight-training fitness regimen. The study found that the men gained more muscle mass and lost more fat when they consumed 2.4 grams (0.08 ounces) of protein per kilogram of body weight per day, compared to men who ate half that amount of protein per day.

Several other studies have suggested that an increased protein intake can fuel muscle recovery and repair. However, a 2016 study that looked at elite cyclists did not support these findings. It showed that increasing protein intake, beyond the extra protein that bikers consumed immediately after a workout, did not speed up muscle recovery or improve performance.

Adults who are elderly and who exercise may also benefit from higher protein intake, found a 2011 study in the journal Nutrition & Metabolism. Older people who work out and consume a higher-protein diet have less sarcopenia, or muscle wasting associated with aging, the study found.