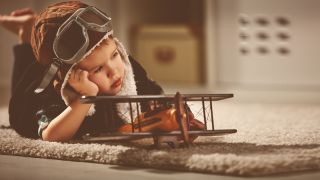 Once they get a taste, little kids may obsess about any given thing, such as Thomas the Tank Engine, dinosaurs or princesses. Other kids may watch the same movie repeatedly or request the same bedtime story time and again.

These obsessions, often called intense interests, affect about one-third of young children, but scientists aren't sure what causes the fixations. Still, investigations have revealed some tidbits about intense interests, including who is most affected (boys more so than girls, the research shows) and at what age these obsessions tend to begin (around 18 months of age).

"In some cases, [an intense interest] is just enjoyable. It's [just] something they like," said Judy DeLoache, a professor of psychology at the University of Virginia. "It's perfectly normal. There isn't anything weird about it." [Creative Genius: The World's Greatest Minds]

Unless an intense interest is somehow harmful, parents shouldn't be concerned, DeLoache told Live Science. "You can either facilitate or be neutral," she said. "I think it's hard to discourage."

In a 2007 study published it in the journal Developmental Psychology, DeLoache and her colleagues described intense interests as a "relatively long-lasting" fascination children pursue almost everywhere — at home, friends' houses and day care, for example — which people beyond the immediate family notice.

The researchers surveyed and interviewed the parents of 177 young children, finding that 75 percent of those kids with intense interests were boys, said DeLoache.

It's unclear why boys may be more likely to have these interests, but one idea is that boys tend to be "systemizers" — that is, they focus their attention on a narrow subject, and try to understand and organize it, researcher Simon Baron-Cohen, a professor of developmental psychopathology at the University of Cambridge in England, has suggested in previous studies.

Intense interests emerge at about the same time in boys and girls, DeLoache said. But she found in her 2007 study that boys tended to have interests in vehicles, trains and machines, whereas girls usually gravitated toward dolls or dress-up.

In another study, researchers found that young boys were interested in concepts, such as dinosaurs, airplanes and horses, while young girls were more interested in pretend play, arts and crafts, and reading and writing. This 2008 study was published in the journal Cognitive Development.

In most cases (78 percent), parents couldn't pinpoint any specific event that sparked their child's intense interest, the 2007 study found. One mother said her son had "always been interested in trucks. It has just always been there."

In contrast, 22 percent of the parents remembered what triggered their child's intense interest. For instance, one mother said that her son's fascination with dinosaurs started after he received a dinosaur book and toys as a gift, according to the 2007 study.

Overall, children pursued their interests for times spanning six months to three years, the parents reported in the 2007 study.