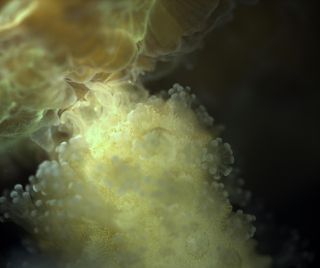 For the first time, scientists are getting a glimpse of how microscopic marine creatures move about in their underwater environment and interact with one another on the ocean floor.

The new imaging system — an underwater microscope and computer interface that can be operated by a diver — was developed by the Scripps Institution of Oceanography's Jaffe Laboratory for Underwater Imaging at the University of California, San Diego.

Dubbed the Benthic Underwater Microscope (BUM), it is the first microscope to image the seafloor and its inhabitants at such a small scale. [Photos: The Secret Lives of Corals]

Researchers used the microscope to observe tiny coral polyps in the Red Sea and in Maui. They reported in a new study that recording the miniscule organisms' activities offered unprecedented insight into the how the polyps live and behave.

Life on a smaller scale

Coral reefs can be massive, stony structures that host a diverse community of marine life. But the individual coral polyps that build them are small, soft-bodied animals — miniature mouths ringed with tentacles. To understand how reef colonies confront and manage threats such as pollution and climate change and competitors such as algae, it's important to not only look at the reef system, but to investigate the activity of the polyps themselves, according to study co-author Tali Treibitz.

Treibitz, an assistant professor at the School of Marine Sciences at the University of Haifa in Israel, told Live Science that BUM made it possible to observe what the 1-millimeter-long (0.04 inches) polyps were doing while still in their natural environment — how they fed, competed with other corals and responded to colonization by harmful algae.

BUM's design allows the scientists to maintain a distance of at least 2.5 inches (6.4 centimeters) from the polyps they are observing, so they don't disrupt them. A soft, pliable lens — similar to the lens in the human eye — allows the microscope to adjust its focus quickly. And an extremely short exposure time of less than 1 microsecond helps eliminate motion blur.

The equipment requires two underwater housings. One holds the microscope — optics and illumination — while the other holds the computer, a hard drive for image capture and a screen that shows the microscope's images to the diver in real time.

For the team's research, it typically took about 5 to 10 minutes to set up the microscope, according to study co-author Andrew Mullen, a doctoral student of ocean science at the Scripps Institution of Oceanography.

"Once it was set up, the diver could take a series of images very quickly," Mullen told Live Science. [Images: Colorful Corals of the Deep Barrier Reef]

The underwater microscope is even powerful enough to capture images of the single-celled algae that live inside corals, Mullen added.

During the Red Sea dives, BUM captured an unusual behavior among the coral polyps that had never been observed before: Polyps in the same colony that were close together would embrace each other at night. Scientists aren't sure what the purpose of this behavior is, but they describe it as "kissing."

BUM observations in Maui targeted reefs that suffered bleaching in 2015, when higher-than-normal ocean temperatures triggered the corals to expel the symbiotic algae that lent them their color. Bleached reefs can regain their algae allies and recover if conditions improve, but the 2015 bleaching event left the Maui reefs vulnerable to harmful algae.

The scientists used BUM to observe the algae invasion on the reef as it happened, and learned that the algae followed a specific growth pattern, taking hold in areas of the reef between the coral polyps, likely because those regions of the reef were thinner and more vulnerable after bleaching.

"People care about these huge ecosystems," Mullen said. "But if you want to take care of these ecosystems, you have to know about the things that are happening at the small scale that are impacting them."

Treibitz added that BUM could prove to be an important tool for understanding large marine communities like coral reefs, by offering a window into the processes of their tiny builders.

"With our microscope, you can image the polyps live and in situ — seeing everything they're doing to survive — and give a wider view of what's actually happening," she said.

The findings were published online today (July 12) in the journal Nature Communications.