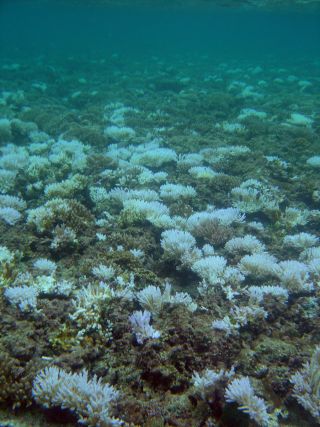 Coral bleaching is devastating reefs around the globe.
(Image: © NOAA.)

The industrial age of fossil fuels has severely changed the Earth's ocean ecosystems. Our oceans absorb about one-third of human-caused carbon-dioxide, but unfortunately rising emissions have surpassed what the oceans can sustainably absorb.

As the world continues to burn fossil fuels at an increasing rate, people are pumping more and more carbon dioxide and other greenhouse gases into the atmosphere, which act like a blanket over the Earth, causing the planet to warm. The warming and the increased carbon dioxide in the oceans are combining to put coral reefs, some of the most biodiverse and important ecosystems on the planet, in jeopardy.

Though associated with warm waters, coral reefs are highly susceptible to increases in water temperature. Most corals get their energy, nutrients and vibrant color from algae that live symbiotically within the corals' tissues, but when water temperatures get too high, corals expel these algae, losing their color and nutrients — the resulting stark white appearance is called coral bleaching. If the coral does not regain algae, the coral polyps eventually die, because they cannot live long-term without these nutrient-supplying algae.

While a variety of stressors can trigger coral to expel their algae, ocean warming is one of the most prevalent causes. Even a minute increase in average temperatures can result in coral bleaching, and in some cases, large areas of coral reefs will expel their algae, resulting in mass bleaching events. Coral reefs build up over thousands of years, yet the rapid pace of global warming can cause coral bleaching — which is disastrous and extremely difficult for reefs to recover from — at a much faster pace.

The changing ocean chemistry is also causing the seas to become more acidic. Ocean acidification threatens coral reefs, as it threatens the ability of corals — as well as other animals like oysters, mussels, clams and pteropods, foundational to the ocean food chain — to create their calcium carbonate skeletons. When carbon dioxide interacts with seawater, chemical reactions deplete substances that are vital for the growth of coral skeletons. When these substances disappear, corals start to grow more slowly. Compounded with this, is the fact that as the oceans become more and more acidic, coral skeletons could actually start to dissolve — a fate already befalling pteropods.

Coral reefs have already faced losses from other human activity, like destructive fishing, pollution and sedimentation. These coral reefs are highly vulnerable to future losses from ocean warming and acidification because of the damages already incurred. Researchers estimate that roughly 80 percent of Caribbean coral cover has been reduced, with an approximate 50 percent reduction rate in the Pacific. Coral reefs are home to one-quarter of all known fish species, and must be protected from future damage.

While improvements in fuel efficiency could help in curbing the amount of emissions that underlie these threats, switching to clean energy sources like offshore wind could not only help reduce emissions, but also prevent destructive offshore gas and oil drilling from polluting the environment. These practices result in their own harmful emissions and also directly threaten surrounding ecosystems with the risk of a spill.

If people continue to drill for oil and gas offshore, more coral reefs and marine ecosystems will see both direct and indirect effects. Instead of looking to expand drilling into the Atlantic Ocean — a prospect made more disconcerting following the Gulf oil spill disaster — the government should invest in clean, renewable energy sources to combat climate change and protect coral reefs and countless marine animals in the future.

The author's most recent Op-Ed was "Tar Washing Ashore Shows Gulf Coast Not Back to Normal." Follow all of the Expert Voices issues and debates — and become part of the discussion — on Facebook, Twitter and Google +. The views expressed are those of the author and do not necessarily reflect the views of the publisher. This version of the article was originally published on Live Science.