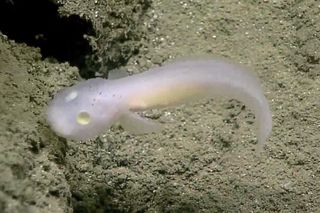 Scientists spotted this ghostly fish in the deep waters of the Marianas Trench Marine National Monument, making it the first time anyone has seen a fish in the family Aphyonidae alive.
(Image: © NOAA Office of Ocean Exploration and Research)

A living, swimming "ghost fish" has been seen live for the first time ever.

The fish, part of the family Aphyonidae, was caught on camera during an ongoing National Oceanic and Atmospheric Administration (NOAA) exploration by the ship Okeanos Explorer. The exploration centers on the deep ocean at Mariana Trench Marine National Monument, a protected area spanning 95,216 square miles (246,608 square kilometers) east of the Philippines.

The secretive fish was swimming along a ridge 8,202 feet (2,500 meters) down, according to NOAA. The animal is about 4 inches (10 centimeters) long, with translucent, scale-less skin and eerie, colorless eyes. No fish in the family Aphyonidae has ever been seen alive before. [See Photos of Spooky Deep-Sea Creatures]

"This is really an unusual sighting," Bruce Mundy, a NOAA fishery biologist said in a video released by the agency.

Aphyonidae is a family in the order Ophidiiformes, which also contains bottom-dwelling cusk eels of the Ophidiidae family. The deepest-dwelling fish ever found, Abyssobrotula galatheae, was a cusk eel. It was trawled from the Puerto Rico Trench at a depth of 27,460 feet (8,370 m).

Most of the specimens ever found in the Aphyonidae family were accidentally caught during trawling or dredging operations, Mundy said.

"There has been a big debate about whether these are pelagic, living up in the water column, or whether they're associated with the bottom, like this one is," he said. The observation of the ghostly fish flitting along the ocean bottom doesn't settle the question, he said, but provides the first evidence to suggest that these fish are bottom-dwellers.

"Our interns think that this fish looks like Falkor, a dragon from 'The Neverending Story,'" Shirley Pomponi, the leader of the biology science team of the deep-water exploration project, said in the NOAA-released video.

The NOAA expedition is part of a larger three-year project to explore the little-studied Pacific marine national monuments. Dives ended on July 8, with webcams streaming at NOAA.gov. For some biologists, though, the trip has already paid off.

"Some of us working with the fish have a wish list, you know, sort of a bucket list of what we might want to see, and a fish in this family is probably first on this list for a lot of us," Mundy said. "This is just remarkable."