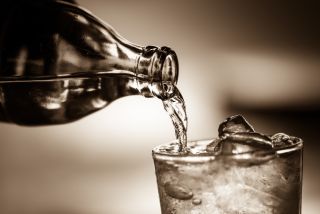 Crystal Pepsi is back. Again.

PepsiCo announced in June that the clear soda will hit U.S. markets on Aug. 8, a comeback from the 1990s apparently spurred in part by the advocacy of a professional competitive eater. If that sounds strange, well, the history of clear sodas is littered with weirdness.

There was the time a Soviet commander requested (and received) a personal stash of clear Coke. And the time that Nazi Germany, cut off from Coca-Cola syrup imports during World War II, invented Fanta. And then there was Clear Tab, a product released by Coca-Cola in a kamikaze mission to destroy Crystal Pepsi. (It worked.)

The original Crystal Pepsi had a brief run. It was on the market in the U.S. from 1992 to 1993 — long enough to garner enough nostalgia points to return 23 years later.  [8 Tips for Fighting Sugar Cravings]

"There's definitely been a push toward nostalgia in soda drinks," said Tristan Donovan, author of "Fizz: How Soda Shook Up the World" (Chicago Review Press, 2013). "The overarching context for soda companies is [that] sales are falling and falling and falling. They've been falling consistently since 1998. They've got to find something to get people interested in soda again."

In the 1800s, soda fountain drinks came in all colors and flavors — everything from strawberry to celery, Donovan told Live Science. These sugary, bubbly beverages were hawked as the cure for any number of ailments. Until 1903, Coca-Cola famously contained a dash of cocaine, which was an ingredient in many supposedly medicinal compounds during the Victorian Era. Pepsi, Donovan said, was supposed to be good for the stomach. 7 Up, introduced in 1929, contained lithium salts, now used as a powerful mood-stabilizing drug.

That soft drinks became largely synonymous with brown cola beverages was a trick of marketing, Donovan said. Coca-Cola's marketing was so strong that people got used to the idea that if they were going to crack open a soda, it was going to be cola-flavored.

Coke and Pepsi battled it out for supremacy, and by the late 1980s were willing to go toe-to-toe over mere fractions of a percent of the market share, Donovan said.

Enter Crystal Pepsi. The drink was the brainchild of David Novak, formerly the CEO of Yum Brands, who came up with the idea of a clear cola to take advantage of consumer interest in purity and health, he recently told Business Insider.

"People started associating clear liquids with 'healthy' and colored liquids as 'processed,'" Donovan said. (Probably better, then, not to get into the legal case over whether kind-of-clear Mountain Dew can dissolve a mouse carcass into a "jelly-like substance.")

There had been a few stabs at clear colas before Novak's concoction, but nothing widespread. The weirdest was probably White Coke, a clear version of Coca-Cola specially produced for Russian Marshal Georgy Zhukov, who reportedly wanted the flavor of the iconic American drink without all that imperialist baggage. White Coke came in a clear bottle topped with a red-star-festooned cap, according to Mark Pendergrast, author of "For God, Country and Coca-Cola" (Scribner's, 1993).

Global politics also played into the invention of a clear(ish) soda in World War II Germany. Fanta, which now comes in many fruit flavors, was originally produced in Nazi Germany when the Coca-Cola branch there couldn't import Coca-Cola syrup. The original Fanta looked like ginger ale and included bottom-of-the-barrel ingredients such as whey left over from making cheese, according to "Secret Formula: How Brilliant Marketing and Relentless Salesmanship Made Coca-Cola the Best-Known Product in the World" (Harper Paperbacks, 1995).

Crystal Pepsi did well when it first came out in 1992, gaining about 1 percent of market share — a huge and very lucrative proportion at the time, Donovan said. But then Coke fought back. The company released Tab Clear in an effort to "knock the wheels out of Crystal Pepsi," he said. In an interview published in 2011 in the book "Killing Giants, 10 Strategies to Topple the Goliath in Your Industry," the chief marketing officer of Coca-Cola at the time of Tab Clear's release called it a "kamikaze" strategy. The idea was to market Tab Clear as a diet beverage and smear Crystal Pepsi as one by association.

"Tab Clear destroyed itself and Crystal Pepsi in the process," Donovan said.

Those excited about Crystal Pepsi's return can thank Kevin Strahle, a competitive eater and YouTube star, who was once a sales representative for PepsiCo. Strahle launched an online campaign to bring back Crystal Pepsi after buying a yellowed 20-year-old bottle, drinking it on camera and promptly vomiting it up. Pepsi responded in 2015 with a letter promising that Strahle and his followers would be "happy with what's in store."  (The rerelease may also have been influenced by Coca-Cola's decision in 2015 to reintroduce its favorite from the ꞌ90s, Surge.)

Whether the novelty of Crystal Pepsi's return will do much for the company's bottom line remains to be seen, but there's one way to gauge its success.

"If we see Tab Clear coming back," Donovan said, "then we know that Pepsi is doing well."