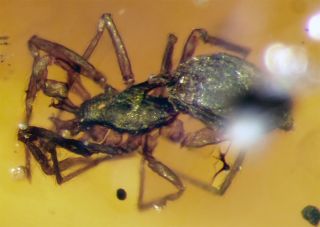 About 99 million years ago, two bizarre spiders — each sporting hard, armored plates on their bodies and horns on their fangs — became mummified in sticky tree resin that turned into amber.

They remained there until recently, when scientists discovered the chunk of amber and analyzed the spiders locked inside.

These ancient, extinct spiders are part of a spider family called Tetrablemmidae, a group whose males often have horns on their heads and fangs, said study lead author Paul Selden, a professor of invertebrate paleontology at the University of Kansas.

But the newly identified species has rather "complex" horns that have two prongs at their tips, which is peculiar, even for a Tetrablemmid spider, Selden said. [Weird and Wonderful: 9 Bizarre Spiders]

"The new fossil is an adult male and takes these horns to an extreme," Selden told Live Science in an email. "Nevertheless, the new species can be firmly placed within the modern family and is similar to species living in Southeast Asia and China today."

Both of the amber fossils came from a mine in northern Burma (also known as Myanmar). Selden met with a dealer who was selling the polished specimens in China, and the scientist and his colleagues purchased those that were of scientific interest, he said.

Tetrablemmid spiders usually have six or fewer eyes, but the researchers couldn't find any on the Cretaceous-age specimens, likely because those body parts didn't preserve well, he said. However, the mummies look somewhat similar to the modern Tetrablemmid spiders in the genus Sinamma, which live in southwest China. Sinamma species have eyes on the upper part of the head, so the newfound species likely did too, the researchers said.

"What caught my eye about this spider was the enormous projection on its head, most likely bearing eyes, and the bizarre horns on its fangs," Selden said.

Selden and his colleagues named the new species Electroblemma bifida. The genus name refers to the Greek "elektron," or amber, and "blemma" or appearance, a common suffix used for tetrablemmid spiders. The species name refers to the two-pronged tip at the end of the horns on this spider's fangs, the researchers said.

In general, Tetrablemmid spiders have armor-like hard plates covering their bodies that protect them from predators, such as spider-hunting wasps, Selden said. These spiders are usually tiny, only about a quarter inch (0.6 centimeters) long. The mummified specimens are slightly smaller, with one measuring 0.06 inches (1.58 millimeters) long.

Tetrablemmid's ancestors are known from islands in the Indian ocean, and it's unclear how Tetrablemmid spiders spread to Southeast Asia during prehistoric times, but Selden and his colleagues have an idea. Burmese amber occurs on a geological plate called the West Burma block, which was attached to Australia about 400 million years ago, he said. [Photos: Mummified Bird Wings Preserved in Amber]

"That was before there were spiders known on planet Earth," Selden said. "Over the ensuing millennia, this little plate drifted across to join up with the continent we now call Eurasia, and it reached there sometime in the Jurassic period."

During that period, these Tetrablemmids somehow moved onto the newly docked block in southeast Eurasia, and diversified along with other critters, many of which are also mummified in Burmese amber, Selden said.

The study will be published in the November 2016 issue of the journal Cretaceous Research.