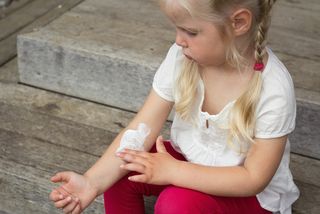 To bathe or not to bathe: that has been the question for parents of children with eczema.

Some parents think that frequent bathing ultimately will dry out the skin and make eczema symptoms worse. But others think that baths are an important way to control symptoms, to soothe the skin and to keep it clean. Meanwhile, doctors have been split over the years on the best way to go, offering parents conflicting opinions.

Now, a new review of studies on bathing and eczema attempts to provide some clarity. Doctors affiliated with the American College of Allergy, Asthma and Immunology (ACAAI) said that daily bathing is best, as long as it is followed by a thick coat of moisturizer. The technique is called "soak and smear." Their review appears today (June 29) in the Annals of Allergy, Asthma and Immunology. [7 Baby Myths Debunked]

Eczema, also called atopic dermatitis, results in extremely dry and itchy skin. The cause is unknown, but it appears to be triggered by an overactive immune system. The condition is on the rise: The percentage of kids with eczema or any kind of skin allergy increased between the years 2000 and 2010, rising from 8.6 percent to 17.1 percent among black children; from 5.0 percent to 9.9 percent among Hispanic children; and from 7.6 percent to 12.6 percent among white children, according to the Centers for Disease Control and Prevention.

Yet numbers aside, parents are often distraught to see their young children with eczema scratching and scratching till their skin turns red and painful. They just want relief for their children.

Some medical professionals have recommended infrequent bathing — less than once a day. The theory here is that some soaps can aggravate eczema symptoms, and that frequent bathing also results in water evaporation from the skin, which accelerates drying.

Conversely, other doctors have advocated for frequent bathing — at least once a day — with pH-balanced soaps that don't aggravate eczema symptoms, followed by a gentle patting to dry the skin and then an application of moisturizer.

In the absence of consistent advice, a group of allergists led by Dr. Ivan Cardona of Maine Medical Center in Portland, undertook an extensive review of the scientific literature.

"Because parents are confused, and because they often take their questions to their allergist, we wanted to examine the studies that have been published on the topic and see if there was agreement on just how often children with eczema should be bathed," Cardona said. [9 Weird Ways Kids Can Get Hurt]

In the course of their research, Cardona and his colleagues learned that the debate to "bathe or not to bathe" has been going on for more than a century … and for good reason. The actions of frequent bathing with harsh detergents in hot water followed by aggressive drying do add up to make eczema symptoms worse, because they remove protective skin oils and exacerbate skin drying, the study authors found.

Couple this with the stinging feeling that some children with eczema experience when they submerge themselves in water, and it is easy to see why some doctors and parents have been reluctant to bathe these kids.

But more recently, research has increasingly revealed the benefits of daily bathing in lukewarm water that is followed within 3 minutes by an "occlusive" moisturizer — which creates a thick, protective layer over the eczema patches and completely separates the skin from the air — to seal in moisture, the researchers found. This process is called "soak and smear," a term introduced by other researchers in a 2005 journal article in JAMA Dermatology. Cardona said he also likes the phrase "soak and seal."

"The smear [or seal] part is really the most important element, because unless moisturizer is applied immediately … the skin is likely to dry out even more," said Dr. Neal Jain, the senior author on the paper and an allergist in Phoenix. "Our feeling is that the burden of evidence, which is admittedly limited, favored the 'soak and smear' method over the 'dry' method for managing eczema," he added.

The study authors noted that, based on their own experience with patients, aggravation of eczema by frequent bathing is more related to the use of detergents and lack of proper moisturizer application within 3 minutes of bathing than to the frequency of water exposure.

Cardona, Jain, and the study's third co-author, Dr. Leland Stillman of Maine Medical Center, also noted that their research review isn't the final word on the question of bathing frequency but rather, hopefully, a catalyst for more qualitative research on the subject and more definitive statements and instructions from medical-expert groups.