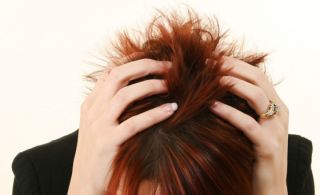 Why does scratching an itch only make it worse? As it turns out, a brain-signaling chemical released in response to scratching has some unintended effects, scientists say.

Scratching an itch provides a bit of relief at first. It works because scratching causes mild pain, so the neurons in the spinal cord transfer pain signals instead of itch signals up to the brain.

But then the brain releases a neurotransmitter called serotonin to dampen the pain, and in a new study, researchers found that this serotonin release also activates certain neurons in the spinal cord, which creates more itching sensations.

The researchers conducted their work in mice, but the same vicious cycle of itching and scratching could be going on in people as well, they said.

"The problem is that when the brain gets those pain signals, it responds by producing the neurotransmitter serotonin to help control that pain," co-author Zhou-Feng Chen, director of Washington University's Center for the Study of Itch, said in a statement. "But as serotonin spreads from the brain into the spinal cord, we found the chemical can 'jump the tracks,' moving from pain-sensing neurons to nerve cells that influence itch intensity."

In the study, the researchers genetically engineered mice so that they lacked the genes needed to make serotonin, and then injected the mice with a substance that makes the skin itch.

They found the mice didn't scratch as much as normal mice. However, when the genetically altered mice were injected with serotonin, their normal scratching behavior in response to itching returned.

This suggests that serotonin, which has a broad range of functions in the body, is also important for feeling the itch sensation. [Know Thyself Better: 10 Little-Known Body Parts]

The findings could help find treatments for peoplewho experience chronic itching. It might be possible to break the communication between serotonin and the spinal cord neurons involved in itching, the researchers said.

This way, the serotonin that's released in response to the pain of scratching wouldn't also activate more itching, they said.

The study was published Thursday (Oct. 30) in the journal Neuron.