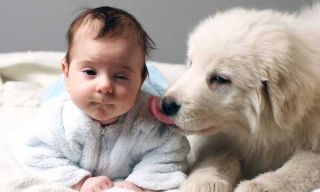 Children who have a dog around them during their first year of life will have a milder allergic reaction to dogs if they develop dog allergies later in life, according to a new study.

Researchers at the University of Cincinnati and Cincinnati Children's Hospital Medical Center found that children who had a dog in their home during their first year of life were four times less likely to develop eczema than children who were allergic to dogs but did not have a pet dog around.

Eczema is considered to be an early signal of the severity of a child's later allergies.

The study was based on records from 636 children in a long-term allergy and pollution study. All had parents with allergies, and were considered to be at high risk for developing allergies themselves. The findings are published in the October issue of the Journal of Pediatrics.

Cats had the opposite effect. Among children with a cat allergy, those who had one around during their first year were 13 times more likely to develop eczema than those who didn't.

"There may be differences between the allergens themselves and the effect they have on the immune system," Epstein told MyHealthNewsDaily.

Others offer different explanation for the findings.

Dogs usually defecate and urinate outside the house, while cats do their business inside the home, said Dr. Leonard Bielory, an asthma and allergy specialist at New Jersey Medical School and a spokesman for the American Academy of Allergy, Asthma & Immunology, who was not involved with the study.

Bielory said he routinely advises his patients already suffering from allergies that having a cat may provoke worse allergic reactions than a dog because of their lifestyle.

"There is a difference in the quality of exposure to infectious agents, and other proteins people could be allergic to," Bielory said.

While the study gave some further hints about allergic reaction and sensitivity, Epstein said further study is needed. She's planning a future study that will follow up with the children as they get older, and see how they might develop other allergic diseases.

"This is just eczema...we don't know yet what's going to happen in terms of asthma and rhinitis," Epstein said.

Epstein added that while a number of factors such as allergic reactions in parents had been taken into account to avoid confounding the results, there could always be another factor leading to some children not having dogs around.

Until then, she said, patients shouldn't be too hasty in acquiring or getting rid of a pet.

"To make strong recommendations, we'd want to know what happens with the other allergic diseases as well," Epstein said.

But as the results stand now, Bielory said, "the concept here is that dog is a man's best friend."