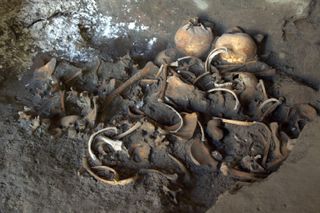 Four bodies were found on the outskirts of Pompeii near the Herculaneum Gate.
(Image: © Soprintendenza Pompeii)

Recent excavations on the outskirts of Pompeii in southern Italy have revealed more victims of the volcanic eruption that buried the ancient city in ash nearly 2,000 years ago.

Archaeologists have discovered the remains of four people, including one teenage girl, in the ruins of a shop, according to a statement from the Soprintendenza Pompei, the Italian authority in charge of managing the ancient site. The group of people seem like they tried to take shelter in the backroom of the shop when Mount Vesuvius unleashed a deadly eruption in A.D. 79.

Images from the excavation show a jumbled mass of bones emerging from a trench. The skeletons appear to have been disturbed by looters who went digging through the ash in search of valuables some time after the volcanic eruption, according to the archaeologists' announcement.

But the looters missed three gold coins that date back to between the years 74 and 78, as well as a flower in gold leaf, which probably was part ofa pendant from a necklace, the researchers said. A furnace discovered in the shop has led the excavators to speculate that the building was a bronze workshop. [See Images of the Newfound Skeletal Remains and Artifacts at Pompeii]

The discovery adds to the hundreds of bodies, or at least body imprints, that have been foundat Pompeii since the 19th century. Many of these victims were found in a gnarled death pose, as most are believed to have died suddenly when Vesuvius sent superheated, ash-laced volcanic gases through the city. The debris that rained down on the once-bustling Roman city essentially froze it in time, preserving not only victims' bodies, but also graffiti, wall paintings and even bits of food.

These newly discovered skeletons were found near the necropolis outside of the Porta Ercolano, or Herculaneum Gate, which was on the outskirts of Pompeii and opened onto a road to Herculaneum, another smaller city that was buried in the same eruption.

A team of French and Italian archaeologists has been excavating the site since May to try to learn more about this commercial sector outside the walls of Pompeii. So far, the researchers have excavated another workshop; they don't yet know what this shop was used for, but there is a spiral staircaseat the center of the room that seems to lead to the bottom of a well. Additionally, the archaeologists uncovered an intact pre-Roman tomb dating back to the fourth century B.C., complete with six black-painted pots surrounding the skeleton of the tomb's occupant.