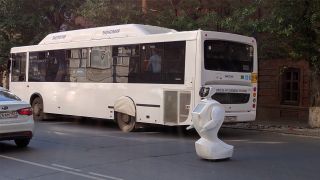 The Promobot IR77 during its first escape attempt.
(Image: © Promobot)

A robot in Russia caused an unusual traffic jam last week after it "escaped" from a research lab, and now, the artificially intelligent bot is making headlines again after it reportedly tried to flee a second time, according to news reports.

Engineers at the Russian lab reprogrammed the intelligent machine, dubbed Promobot IR77, after last week's incident, but the robot recently made a second escape attempt, The Mirror reported.

Last week, the robot made it approximately 160 feet (50 meters) to the street, before it lost power and "partially paralyzed" traffic. [The 6 Strangest Robots Ever Created]

Promobot, the company that designed the robot, announced the escapade in a blog post the next day.

The strange escape has drawn skepticism from some who think it was a promotional stunt, but regardless of whether the incident was planned, the designers seem to be capitalizing on all the attention. The company's blog includes photographs of the robot from multiple angles as it obstructs traffic, and the robot's escape came a week after Promobot announced plans to present the newest model in the company's series, Promobot V3, in the fall.

The company said its engineers were testing a new positioning system that allows the robot to avoid collisions while moving under its own control. But when a gate was left open, the robot wandered into the street and blocked a lane of traffic for about 40 minutes, the blog post states.

The Promobot was designed to interact with people using speech recognition, providing information in the form of an expressive electronic face, prerecorded audio messages and a large screen on its chest. The company has said the robot could be used as a promoter, administrator, tour guide or concierge.

In light of the robot's recent escapes, and citing multiple changes to the robot's artificial intelligence, Promobot co-founder Oleg Kivokurtsev told The Mirror, "I think we might have to dismantle it."

But in its blog post, the company said it considers the escape a successful test of the machine's new navigation system, because the robot didn't harm anyone and wasn't damaged during the getaway.

According to the company's English-language website, one of the advantages of the Promobot compared to a human promoter is that it "will not be confused and stray."