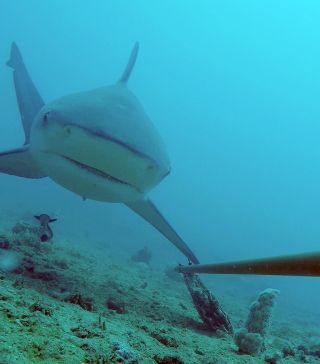 Before you go to the beach this summer, you may want to check where the sharks are hiding: In the largest survey of sharks around the world, scientists have visited 100 reefs and collected more than 5,000 hours of underwater footage, revealing the locations with the most sharks — and where they're scarce.

These preliminary results suggest that some spots are teeming with the ocean predators, while other heavily fished areas of the ocean have little or no sign of the marine animals.

For this huge undertaking, known as the Global FinPrint, researchers are using baited remote underwater video (BRUV) equipment to capture images of sharks and other animals as they pass by. By the end of the three-year project, which began last year, the researchers hope to have cataloged sharks and rays around 400 reefs. [In Photos: Underwater Cameras Capture World's Sharks]

Nearly a quarter of the more than 500 species of sharks swimming in the world's oceans are threatened with extinction, according to the Smithsonian. Data collected from this census could help scientists and policymakers better protect at-risk shark populations, the researchers say.

At least 30 species of sharks and rays have been observed in the first 100 reefs, according to FinPrint lead scientist Demian Chapman, an associate professor of marine sciences at Florida International University (FIU).

In some locations, sharks and rays were so common that the researchers started a competition on Twitter, using the hashtag #BRUVbattle, for the most sharks in a single screenshot. The team from Australia currently holds the record, with 12 gray reef sharks caught on camera along Jarvis Reef in the Pacific Ocean.

We're flipping out just like #BRUV that got flipped by this great #hammerhead. We've reached 1000 followers on FB! pic.twitter.com/W6ZcgakrBk

The scientists even caught some silly antics under the sea: A hammerhead seemed to try to eat, or perhaps defeat with its mouth, one of the cameras, eventually flipping it over; and a feisty crab got into a scuffle with a hungry octopus, as both creatures tried to gobble up the BRUV bait. Apparently, the crab won, a Twitter video revealed.

Locations like Australia's Great Barrier Reef and the Bahamas showed an abundance of sharks and rays, Chapman said.

However, cameras rolled for hours in some more heavily fished locations with little or no signs of sharks. Researchers collected more than 100 videos off the coast of Malaysia, for instance, and only one shark was caught on camera. Videos in Jamaica resulted in not a single shark sighting.

"Some of these areas are really overfished, and we don't have the big predators playing the ecological roles they used to," Mike Heithaus, a marine biologist at FIU and a FinPrint researcher, told Live Science. "We probably need to come up with regulation that will help rebuild those populations."

As more data are collected, the researchers will know where the populations are healthy and where they're threatened, Heithaus said. Also, scientists can better understand "when, where and how" sharks and rays are vital to the health and function of coral reef ecosystems.

Global FinPrint will share the census data on an open-access database, but Heithaus said the project won't stop at data collection.

"The next step in this project, after we do the science, is to really work with governments, local communities, to formulate plans for the management and conservation of these animals and their habitats," Heithaus said.