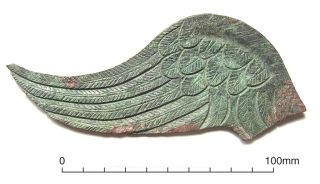 After cleaning, the wing still has a greenish hue left from hundreds of years of corrosion.
(Image: © Cotswold Archaeology)

Archaeologists have unearthed a greenish-colored bronze wing in England that dates to the Roman period, an archaeology company reports.

The 5.5-inch-long (14 centimeters) wing is small enough to fit in a person's hand, the archaeologists said. It's meticulously covered with detailed plumage, and was likely part of a Roman bronze sculpture of a god or goddess, they said.

Archaeologists from Cotswold Archaeology discovered the wing while they were investigating a site before a construction project, called the Greyfriars Development, in Gloucester, a city in southwest England. At first glance, the wing was covered with a thick layer of soil and corrosion, the archaeologists said. [In Photos: Ancient Roman Fort Discovered]

The corrosion is no surprise, as bronze (a metal made out of copper and tin) often corrodes into a lime-green color when it's exposed to pollutants and humidity over time, according to the U.S. General Services Administration.

The archaeologists cleaned and X-rayed the specimen, which revealed the wing's finely cast detail. The wing looks similar to those seen on eagle statuettes and other eagle imagery from the Roman world, they said in a statement.

Rome held the eagle in high regard, as it was an attribute of the god Jupiter (the equivalent of the Greek god Zeus). The Roman army adopted Jupiter as a symbol of strength and prowess. Moreover, wings in an eagle-like form were also a feature of Victoria, the Roman goddess of victory, who was the Greek equivalent of Nike, the archaeologists said.

Details on the small, bronze wing suggest that it comes from a winged victory statuette of Victoria, they said. However, it's possible that it was part of a statue representing Mercury, a messenger god with wings on his helmet or heels, the archaeologists told Culture24.

It's rare to find a Roman bronze statue, and there are few known depictions of Victoria or eagles in the province, they said. The new specimen was uncovered on an earthen bank located just behind the Roman city wall, the archaeologists said.

"This find once again demonstrates that Gloucester was a high-ranking city in Roman Britain and that its public spaces must have been equipped with a number of bronze statues of gods and emperors," Neil Holbrook, the chief executive of Cotswold Archaeology, said in the statement. "They would have formed a constant visual reminder [of] the heart of the Roman empire for the discharged army veterans who made up most of the population of the Roman city."

This is the third year that Cotswold Archaeology has spent working at the Greyfriars site, and its investigations are now coming to an end. Once conservation work on the wing is complete, the company plans to give it to the Museum of Gloucester, where it will be put on display for the public.