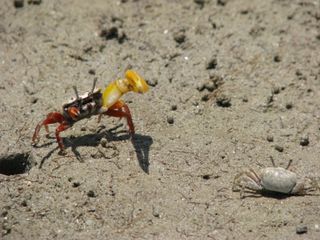 Male banana fiddler crabs take courting to a new, and pushy, level: The little Australian crab males wait for females to enter their burrows and then trap them in order to mate, scientists have found.

Competition for mates is intense for banana fiddler crabs (Uca mjoebergi), the researchers said, with females often choosing between 20 or so males before saying "yes" to some fun between the sand grains.

Why do they stay or go?

Patricia Backwell, a behavioral ecologist at the Australian National University in Canberra, and her colleagues discovered that when males entered the burrow first, 71 percent of females would follow, and 54 percent of those that entered would stay to mate. However, when males used the alternative tactic of waiting for the female to enter first, the odds of mating went up. [Huge Crab Swarm Surprises Submarine Crew | Video]

Though a lower percentage of females would enter first (41 percent), of those that did, 79 percent became trapped, and almost all (90 percent) produced a clutch of eggs, the researchers found.

"Our observations suggest that males are able to gain fertilizations from females that may not have remained in the burrow, by trapping them and coercing them to mate," the authors wrote in the new study, published June 15, 2016 in the journal PLOS ONE.

Competition for mates may explain why these male banana fiddler crabs turn to such pushy mating tactics, the researchers said.

"Mate-searching female fiddler crabs are fussy about the quality of a male's burrow, so they enter it to check its suitability as an incubation site before selecting the male as a mate," Backwell said in a statement. "Some males trap the female inside the burrow, coercing them to mate."

Sexual coercion is not unique to the banana fiddler crab. The researchers noted that the coercion tactic has been observed throughout the animal kingdom, in various insects, reptiles, fish, birds and mammals.