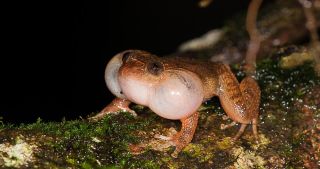 A new frog mating position, only the seventh type ever observed, has been discovered in the monsoonal forests of India.

Bombay night frogs (Nyctibatrachus humayuni) mate by having the male straddle the female without grasping her, and releasing sperm over her back. The female then lays her eggs, allowing the sperm to run down her back and fertilize the eggs.

"Species such as the Bombay night frog, which are endemic to small regions (most often outside protected areas and threatened with anthropogenic activities), definitely require conservation prioritization," study leader Sathyabhama Das Biju, an amphibian researcher at the University of Delhi, told Live Science in an email. "Therefore, natural history studies not only provide necessary information for planning effective conservation strategies, but also highlight unique frogs, such as the ancient night frogs that exhibit highly diverse reproductive behaviors." [See Photos of the Bombay Night Frogs in Mating Positions]

Bombay night frogs mate only during monsoon season nights, and only in the vegetation overhanging flooded forest streams in India's Western Ghats. This made fieldwork a "very challenging experience," Biju said. Researchers had to find the male frogs by listening for their calls and then standing in the fast-flowing streams with infrared camera equipment, trying to keep the electronics from getting rained on while they documented the frog sex.

Often, the frogs' attempts would end with the amphibians falling into the water. They usually returned to their original spots to finish mating, Biju said, but these interruptions stretch out the mating encounter by several wet, uncomfortable hours. "Various venomous snakes" share habitat with the frogs as well, Biju said.

The research team spent 8 hours a night for about 40 nights between 2010 and 2012 documenting the Bombay night frog nightlife. They successfully recorded 13 complete breeding sequences and multiple partial sequences to reveal the new mating position.

Before these observations, researchers knew of six types of amplexus, the name for frog mating behavior. Very few frog species reproduce via internal fertilization; rather, most use the amplexus position (a male-female embrace) to release sperm and egg in close proximity for external fertilization. Most species use either inguinal amplexus (the male grasping in front of the female's back legs with his front legs) or axillary amplexus (the male grasping behind the female's front legs with his front legs).

Other options include "straddle" (the male's pelvis over the female's head), "glued" (the male stuck to the female's rump with abdominal excretions), "cloacal apposition" (male and female rear-to-rear, facing away from one another) and "cephalic" (male on top of female, front feet grasping her throat).

Researchers dubbed the new position the "dorsal straddle." It isn't clear whether this mating position offers advantages over any others; fertilization rates of inguinal amplexus (which evolved very early in frogs) and axillary amplexus are similar, Biju said, and more research is needed to determine the pros and cons of various positions.

"Since genus Nyctibatrachus represents an ancient group of frogs with [the] presence of several interesting forms of reproductive behavior, it would be all the more interesting to study how such diversity may have evolved within this group," Biju said.

In another first, the researchers videotaped snakes eating frog eggs — a phenomenon not before observed in India.

The researchers reported their findings today (June 14) in the open-access journal PeerJ.