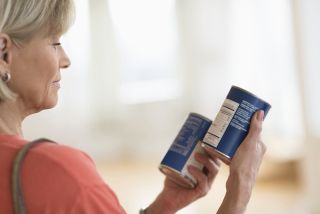 In May, the U.S. Food and Drug Administration finalized plans for a new Nutrition Facts label for packaged foods, with the hope that it will help Americans take better control of their health. It's a good start. The most significant change will be the display of the number of calories per realistic serving, now to be highlighted in large type in all its shocking glory.

It will also be easier to see and understand how much sugar is added to foods such as pasta sauce and canned soup; presumably, it's added in lieu of quality ingredients to make the products taste better.

Health advocates are lauding these new labeling rules. They say the new requirements reflect the latest scientific evidence on how monitoring sugar intake and calorie consumption can help to lower the risk of obesity, diabetes and other chronic diseases. Not surprisingly, many food manufacturers are less than thrilled because the new labels inevitably will call attention to how unhealthy many packaged foods — even those promoted as natural or healthy — really are.

Major food manufacturers — those with more than $10 million in annual food sales — have until July 2018 to comply with the FDA labeling requirements. [Diet and Weight Loss: The Best Ways to Eat]

But the very need for FDA-regulated nutrition labels highlights that our food is so questionable that it requires labeling. Put another way, there's no label on a head of broccoli. That's because there's only one ingredient in broccoli, and that's broccoli.

Instead of arguing about the perfect Nutrition Facts label and what consumers need to know, I propose that we return to purchasing foods that have no need for labeling — foods such as vegetables, fruits, nuts, grains, eggs, fish, oil, coffee and tea. If more Americans got back to buying single-ingredient food products, we'd be a far healthier country. I call it the "no label" diet.

It's hard to say exactly when the nation's food manufacturers went wrong and began adding sugar to healthful foods such as soup. No recipe has ever called for this. Same goes for pasta sauce. When I was growing up, a generation ago, pasta sauce (or tomato gravy, as we Italians called it in Philadelphia) had only five ingredients: tomatoes, basil, olive oil, garlic and salt. True, my mother would make it. Nevertheless, she never saw the need to add sugar or ingredients that would be more at home in a chemistry lab than in her rowdy kitchen.

Moreover, we shopped at places that didn't have food products with labels. All of the vegetables came from a greengrocer two blocks away on "The Avenue". Meat came from a butcher. Fish, admittedly on the rare times we had it, came from a fishmonger. Bread came from an Italian bakery, also on The Avenue, all within walking distance. And that bread had only four ingredients: wheat, water, yeast and salt. There was no label. You just knew what you were getting.

Yes, we had treats. There was vanilla ice cream, with four ingredients: milk, cream, sugar and vanilla. How much sugar? How much fat? I really don't know. We just didn't eat a lot of it because, well, it was ice cream. Too much ice cream makes you fat. We had potato chips, but there were three ingredients: potatoes, oil and salt. The Amish made them fresh, and god were they good.

I don't remember the need for labels when I was growing up, unless you had some kind of food allergy, which was rare. Bread and noodles — those wheat-based foods that nourished much of humankind for millennia — never seemed to be a problem with its "toxic" gluten, as it is now for some people.

Aside from displaying added sugars and calories more prominently, the new label scheme provides little additional useful information compared to the current labels. Gone will be the requirement to list the amounts of vitamins A and C, seeing how few Americans are deficient in these nutrients. Instead, the new label will list the amount of vitamin D. But because vitamin D is found mostly in liver, fatty fish and eggs — the aforementioned "no-label" foods — manufacturers may start adding synthetic vitamin D to their products just to bump up the numbers … to uncertain health benefit.

To be clear, I do think it is critical for people to understand how many calories are in packaged foods. But a cookie is a cookie; breakfast cereal is breakfast cereal. There can be no disguising the fact that foods made in factories hundreds or thousands of miles from your home — created by food scientists with the goal of extending shelf life, reducing cost and maximizing taste with additives in lieu of fresh ingredients — can be good for the long-term survival of the human species. [How Many Calories Am I Burning? (Infographic)]

Until we choose to buy and consume more whole foods that have no need for labels — a label-free diet — we won't be getting any healthier anytime soon.