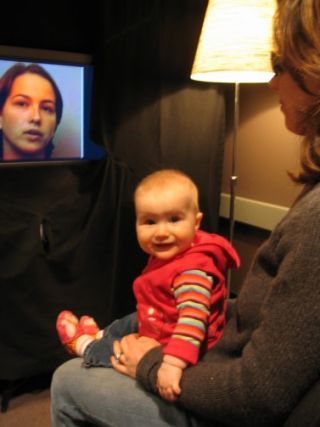 A baby sits on a caregiver's lap before a television screen used in a University of British Columbia study to see how babies watch the silent faces of bilingual (French/English) speakers reciting sentences in both languages. The caregiver wears darkened sunglasses to prevent influencing the baby.
(Image: © Science)

Even infants zone out in front of the television, and it turns out this translates into less time interacting with parents and possible lags in language development, a new study finds.

"We've known that television exposure during infancy is associated with language delays and attentional problems, but so far it has remained unclear why," said lead researcher Dimitri Christakis, director of the Center for Child Health, Behavior and Development at Seattle Children's Research Institute and professor of pediatrics at the University of Washington School of Medicine.

In fact, the American Academy of Pediatrics discourages television watching before the age of 2, a time when critical development, such as language acquisition, occurs. (Christakis said a baby's brain triples in size during the first two years of life, so there's a lot going on in that little noggin.)

To figure out the TV-language link, Christakis and his colleagues rounded up 329 2-month to 4-year-old children and their parents. The kids wore digital devices on random days each month for up to two years that recorded everything they heard or said for 12 to 16 hours. The researchers didn't determine whether the adults and kids were actively watching the television or if it was just on in the background.

Analyses of the recordings revealed that each hour of additional television exposure was linked with a decrease of 770 words (7 percent) the child heard from an adult during the recording session. Hours of television were also associated with a decrease in the number and length of child vocalizations and the back and forth between the child and an adult (called a conversational turn).

"Some of these reductions are likely due to children being left alone in front of the television screen," the researchers write in the June issue of the journal Archives of Pediatrics & Adolescent Medicine, "but others likely reflect situations in which adults, though present, are distracted by the screen and not interacting with their infant in a discernible manner."

And interaction is key for baby's brain.

"The reason it's concerning is because we know that hearing adults speak and being spoken to are critical exposures that play a role in infants development in language," Christakis told LiveScience.

With 30 percent of households having televisions on all the time, the researchers wondered how many fewer opportunities there were for children and parents to communicate and socialize.

"My recommendation first is that children under the age of 2 be discouraged from watching television," Christakis said. He added that even if the TV show is intended for the adults, the effect is the same for their children.

(Four of the authors on the paper were employed by the LENA Foundation, which paid for the data collection and develops technology for the screening, diagnosis and treatment of language delays and disorders in children and adults.)