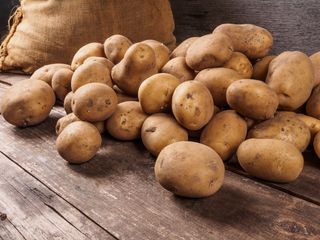 Packing potatoes into your diet may put you at higher risk for having high blood pressure, a new study finds, although the researchers acknowledged that the study presents an interesting paradox.

People who reported eating four or more servings of potatoes per week were 11 percent more likely to have hypertension, compared with people who ate less than one serving of potatoes per month, according to the study.

Moreover, the researchers found that replacing one daily serving of baked, boiled or mashed potatoes with one serving of nonstarchy vegetables was associated with a 7 percent decreased risk of hypertension. [Beyond Vegetables and Exercise: 5 Ways to Be Heart Healthy]

But the effects of potatoes on blood pressure haven't always been clear cut, according to the study, published today (May 17) in the journal The BMJ.

Potatoes presented a paradox, because they have both high levels of potassium, a mineral associated with lower blood pressure, and a high glycemic index (meaning that after a person eats them, his or her blood sugar levels rise rapidly), which has been linked to increased blood pressure, the authors wrote in their study.

However, the effects of eating potatoes on blood pressure over the long term has not been previously studied.

In the study, researchers led by Dr. Lea Borgi, an internist at Brigham and Women's Hospital in Boston, looked at more than 20 years of data on more than 187,000 men and women who were enrolled three long-running studies: The Nurses' Health Study, the Nurses' Health Study II and the Health Professionals Follow-up Study. None of the participants had high blood pressure at the beginning of the study.

Approximately every four years, the participants completed food questionnaires detailing how frequently they consumed certain foods, according to the study. Potatoes were sorted into three categories: french fries, potato chips and potatoes that were either baked, boiled or mashed.

Eating greater amounts of baked, boiled or mashed potatoes and french fries was associated with an increased risk of hypertension in both men and women, the study found. Interestingly, the researchers found no association between potato-chip consumption and hypertension risk. [7 Foods You Can Overdose On]

The authors noted that a limitation of the study was that the participants were asked to report their own blood pressure — the researchers in the study did not measure each person's blood pressure.

Another limitation was that assessment of dietary intake in studies is often imperfect. People may forget what they ate, or not report it accurately.

Determining the types and amounts of foods that people actually eat is a constant challenge in nutrition studies, Dr. Mark Harris, a professor of general medicine at the University of New South Wales in Australia, wrote in an editorial accompanying the study in the journal. Harris was not involved with the study.

However, rather than looking at foods and nutrients individually, it may be more important to look at people's overall diet, Harris said. For example, the National Institutes of Health's "Dietary Approaches to Stop Hypertension" (the DASH diet) — which has been shown to help prevent and control high blood pressure — includes potatoes, he said.