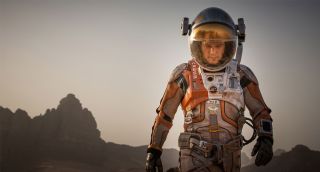 In the new movie "The Martian," released this week, fictional NASA astronaut Mark Watney (played by Matt Damon) gets stranded on Mars and must use his wits to survive.

It's a thrilling tale, based on a 2011 novel of the same name by Andy Weir, published by the Crown Publishing Group. In it, Watney is part of NASA's Ares 3 mission to the Red Planet. An intense storm forces his crew to evacuate the landing site. Watney, impaled by a flying antenna, is assumed dead, while the other crewmembers, scrambling for their own lives, leave his body behind.

But Watney isn't dead. He staggers to the crew's habitat and, with no way of contacting NASA, devises a way to stay alive for four years, until the time of the next planned mission to Mars. He begins by planting potatoes.

I won't spoil the plot when I say that things go terribly, terribly wrong.

Yes, this is science fiction. And yes, Watney has to use only what's at hand to survive — in this case, a few spuds. Yet this does raise an interesting question: How long can someone survive eating only potatoes? [7 Most Mars-Like Places on Earth]

The answer is, not very long. And should humans ever colonize Mars, one could argue that there are better survival foods to bring along.

First, let's start with the pros and cons of potatoes. They have a couple good things going for them. They are relatively easy to grow; they produce a fair amount of edible tubers per square foot, and they store very well, too. This makes them a great famine food — that is, nice to have around in the food cellar if the other crops fail.

Here on Earth, potatoes have been vilified in recent years because of the simple carbohydrates they contain. The body quickly converts carbs into simple sugars, causing spikes in blood-sugar levels that can ultimately lead to obesity and diabetes. Worse, most potatoes are consumed after removing the fibrous skin (which would otherwise help control blood sugar) and then frying the potato in oil or mashing and topping it with fatty butter or gravy.

On Mars, astronaut Watney isn't exactly worried about putting on a few pounds. So for him, potatoes offer a surprising amount of nutrition. They are high in vitamin C (no scurvy!), potassium, magnesium, iodine and some B vitamins. And, most importantly for Watney, they offer much-needed calories.

However, no single food can provide all of the nutrients humans need for long-term survival, except arguably two, neither of which would be practical for a guy stranded on Mars. One is human breast milk, but it spoils quickly. And you'd need a lot of well-fed, lactating women to supply enough milk to keep a man alive for a few weeks, let alone a few years.

The other, perhaps, is whale. The Inuit have been known to eat the animal exclusively for an entire year. One would need to eat a variety of whale parts, however, including undigested food in the whale's gut, to get all the essential nutrients.

Indeed, no single vegetable would suffice for long-term survival, because no plant product offers vitamin B12, which is crucial for brain and nervous system functioning. That said, within the vegetable world, NASA could do much better than potatoes.

For example, Astronaut Watney would have been enormously better off if NASA had packed sweet potatoes instead of standard potatoes. Sweet potatoes are just as easy to grow, yield more calories per square foot, have edible greens (nearly doubling the nutritional offering of white potatoes) and can be eaten raw.

Regular potatoes, close relatives to the poisonous tobacco and nightshade plants, can't be eaten raw and have highly toxic leaves.

NASA does have Mars colonization on its radar screen. The space agency's plans include using a greenhouse with LED lighting to grow a variety of basic food. That's for the astronauts, though. The first wave of human Martian pioneers would need to be creative in their homesteading. Here are a few suggestions of what to grow:

Man doth not live by bread alone ... nor on cassava, sorghum or cattails. But with Mars' diminished sunlight, colder temperatures and salty, infertile soil, these crops (with a few supplements) could give human pioneers on the Red Planet a fighting chance — until humans pollute the planet and warm it up via climate change.

Christopher Wanjek is the author of his own inaccuracy-filled novel called "Hey Einstein," (Northern Passage Press, 2012) about the cloning of the great genius. Follow Wanjek @wanjek for daily tweets on health and science with a humorous edge. His column, Bad Medicine, appears regularly on Live Science.