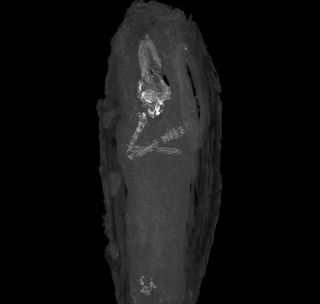 This CT scan of the coffin, dating from 644 B.C. to 525 B.C., shows the mummy's upper limbs and skull.
(Image: © Copyright The Fitzwilliam Museum, Cambridge )

A miniature coffin discovered more than a century ago holds the remains of the youngest Egyptian ever embalmed as a mummy on record, researchers in England said.

A computed tomography (CT) scan of the coffin revealed that the coffin didn't hold mummified internal organs, as researchers had suspected, but instead contains the tiny mummy of a human fetus, according to the Fitzwilliam Museum in Cambridge, England. The mummified fetus was likely at only 16 to 18 weeks of gestation when it died, likely from a miscarriage, museum officials said.

"This landmark discovery … is remarkable evidence of the importance that was placed on official burial rituals in ancient Egypt, even for those lives that were lost so early on in their existence," museum researchers said in a statement.

The British School of Archaeology originally uncovered the 17-inch-long (44 centimeters) coffin in Giza in 1907, and the Fitzwilliam Museum added the coffin to the museum collection that same year. The cedarwood coffin is a perfect miniature of a regular-size coffin from Egypt's Late Period, and likely dates to about 644 B.C. to 525 B.C., museum researchers said. It even has "painstakingly small" carvings on it, the researchers added. [Photos: 1,700-Year-Old Egyptian Mummy Revealed]

For years, museum curators assumed that the coffin held internal organs, which were routinely removed during the Egyptian embalming process. But curators found otherwise when they examined the coffin during preparations for the museum's bicentennial exhibition, "Death on the Nile: Uncovering the Afterlife of Ancient Egypt," which opened in February.

What they discovered in the coffin surprised them.

The wood casket contained a small wrapped package, bound in bandages and covered with molten black resin. An X-ray of the coffin gave inconclusive results, but suggested that the container held a small skeleton. So, the researchers examined the tiny bundle with a micro CT scan.

The resulting CT images revealed that the coffin held the remains of a tiny skeleton, which the researchers left undisturbed.

"CT imaging has been used successfully by the museum for several projects in recent years, but this is our most successful find so far," Dr. Tom Turmezei, recently an honorary consultant radiologist at Addenbrooke's Hospital in Cambridge, England, said in the statement. "The ability of CT to show the inner workings of such artifacts without causing any structural damage proved even more invaluable in this case, allowing us to review the fetus for abnormalities and attempt to age it as accurately as possible."

The CT scans showed that the fetus already had five digits on each of its hands and feet, as well as clearly visible long leg and arm bones. However, it's unclear whether it was a boy or a girl, and it's unknown what caused the miscarriage, if that's what really happened, the researchers said.

The CT images also indicate that the fetus' arms are crossed over its chest. This intricate positioning, coupled with the extraordinary detail on the coffin, suggest that ancient Egyptians placed great importance on the fetus' burial, the researchers said.

"The care taken in the preparation of this burial clearly demonstrates the value placed on life, even in the first weeks of its inception," said Julie Dawson, head of conservation at the Fitzwilliam Museum.

This discovery isn't the only one of its kind. King Tutankhamun's tomb contained two mummified fetuses, which were estimated to be at 25 weeks and 37 weeks into gestation. Archaeologists have also discovered a few other examples of miscarried babies in ancient Egyptian burials, the researchers said.

The public can view the miniature coffin at the Fitzwilliam Museum until the exhibit ends on May 22.