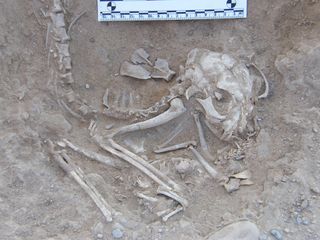 Cat skeletons found in an elite cemetery in Hierakonpolis may have been sacrified and buried as part of some religious ritual.
(Image: © © Hierakonpolis Expedition)

The skeletons of six cats, including four kittens, found in an Egyptian cemetery may push back the date of cat domestication in Egypt by nearly 2,000 years.

The bones come from a cemetery for the wealthy in Hierakonpolis, which served as the capital of Upper Egypt in the era before the pharaohs. The cemetery was the resting place not just for human bones, but also for animals, which perhaps were buried as part of religious rituals or sacrifices. Archaeologists searching the burial grounds have found everything from baboons to leopards to hippopotamuses.

The new find includes two adult cats and four kittens from at least two litters. The size of the bones and timing of the litters hints that humans may have kept the cats. The bones date back to between 3600 B.C. and 3800 B.C., which would be 2,000 years before the earliest known evidence of cat domestication in Egypt, archaeologists report in the May issue of the Journal of Archaeological Science. [See Images of the Ancient Egyptian Cats]

The origin of cats

Archaeologists once believed that cats were domesticated in the time of the pharaohs in ancient Egypt, approximately 4,000 years ago, between 2310 B.C. and 1950 B.C. But in 2004, researchers reported a 9,500-year-old joint burial of a cat and a human on the island of Cyprus.

Meanwhile, cat domestication in China may date back 5,300 years, according to research published in December 2013.

"The last word on cat domestication (when and where) is not yet said," Wim Van Neer, a bioarchaeologist at the Royal Belgian Institute of Natural Sciences and Catholic University, Leuven, wrote in an email to Live Science. [Here, Kitty, Kitty: 10 Facts for Cat-Lovers]

Van Neer and his colleagues, including excavation director Renée Friedman, discovered the cat skeletons by the eastern wall of the cemetery in 2008. All six lay nestled together in a pit about 20 inches (50 centimeters) in diameter and about 10 inches (25 cm) deep.

The archaeologists immediately realized they had something special. Cat skeletons are rare finds, Van Neer said, and complete skeletons are even more exceptional.

The researchers analyzed the size and shape of the cat jaws, comparing them to those of wild and domestic cats in Europe. Scientists also judged the cats' ages by studying the animals' teeth and the growth plates at the ends of their bones. They found that the adults, a male and a female, were just under and just over a year old, respectively.

The kittens were all between 4 and 5 months old at death, but one pair was slightly older than the other, the tooth data revealed. That small age difference means the pairs didn't come from the same female. Nor did they likely come from the adult female buried with them, as she was not old enough to have birthed 4- to 5-month-old kittens.

The size of the bones suggests the cats belong to the species Felis silvestris, a small wildcat found in Africa, Europe and Central Asia. This is the species most likely to have been domesticated into today's modern housecat (Felis catus or Felis silvestris catus).

In an earlier discovery at the Hierakonpolis cemetery, researchers unearthed another wildcat, Felis chaus, found buried with a healed fracture in its leg. Because of the healing, researchers suspect humans kept the cat for at least 4 to 6 weeks before its death.

"It is likely that its long bones were broken during capture and that the animal was then held in captivity and taken care of," Van Neer said.

The new cat skeletons show no signs of injury, healed or not. But the ages of the cats suggest something strange was going on. In Egpyt, wild cats typically produce one litter per year, contingent on seasonal food availability, Van Neer and his colleagues report. Had the six cats in the cemetery been wild, the older generation should have been about 16 or 17 months old, in order to produce kittens 4 to 5 months old.

Instead, the adult cats were about a year old at death, suggesting that the natural reproductive cycle of the cats was disrupted, perhaps because humans were keeping and feeding the animals year round.

Archaeologists know that cats later became an important part of Egyptian life and religion. After about 330 B.C., Egyptians even bred felines near temples to be sacrificed as offerings and mummified.

Researchers will need continued excavations and DNA evidence to pin down the origins of domesticated cats, Van Neer said. The Cyprus cat burial suggests that felines and humans lived in close quarters very early in the Levant, the Eastern Mediterranean region that includes Cyprus as well as modern-day Israel, Lebanon, Syria and Jordan.