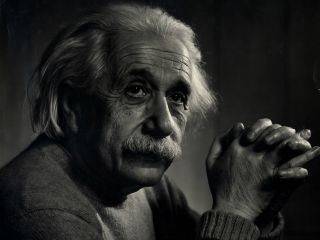 Although Albert Einstein's many iconic photographs have been plastered across mugs and T-shirts for years, physics enthusiasts and art collectors may now be able to get their hands on one of the original, autographed photos that inspired the memorabilia, according to International Autograph Auctions, the British auction house handling the sale.

The iconic photograph is a 15-inch-by-17-inch (38 by 43 centimeters) silver print of the Nobel Prize-winning physicist, taken near the end of his life. It is one of the rare photos capturing Einstein in a pensive pose, his head and shoulders bowed, hands raised and clasped before him. And what makes the photo unique and even more valuable is that it is signed by both the photographer — Yousuf Karsh — and Einstein, with a quote in the scientist's handwriting that reads, "Truth is what stands the test of experience."

The vintage photograph will be sold in a live webcast auction tomorrow (May 7) at 7 a.m. EDT (12 p.m. local time in the U.K.), along with several other documents and photos of historical significance. The autographed photo is expected to sell for at least $8,600 (6,000 British pounds), according to International Autograph Auctions. [8 Ways You Can See Einstein's Theory of Relativity in Real Life]

Karsh had previously photographed numerous important men and women, including Winston Churchill, Walt Disney, Grace Kelly and Queen Elizabeth II. In 1948, when Karsh approached Einstein to photograph him, Einstein was already famous for his theories describing the physical world, but most photographers had portrayed him as a wild-eyed eccentric.

According to the International Photography Hall of Fame and Museum in Missouri, which describes Karsh's sitting with Einstein, the scientist was already an old man in poor health, though he still spent a few hours each day in his office working on the third edition of his book "The Meaning of Relativity." When Karsh arrived at the Princeton Institute for Advanced Study, he found Einstein in his office in wrinkled clothing and sockless shoes, and with wild, uncombed hair, according to the museum. Einstein was not happy with the wool coat he was wearing, so he sent an assistant to find something else. After he put on a sweater, Karsh offered him a comb for his hair, and Einstein replied, "I never use one." And Karsh later recalled on his website, that when he asked Einstein what the world would be like if another atomic bomb were to be dropped, Einstein replied wearily, "Alas, we will no longer be able to hear the music of Mozart."

Albert Einstein was one of the greatest scientists who ever lived, and his ideas revolutionized early 20th-century physics. When it comes to the genius, are you a dummy or an Einstein?

Einstein Quiz: Test Your Knowledge of the Famous Genius

Three years later, Einstein signed the photograph Karsh had taken, using an English version of the last sentence of his foreword to "Relativity: A Richer Truth" (1950), by Philipp Frank, according to the auction house statement. The book was published by the Beacon Press of Boston in 1950 and by Jonathan Cape of London in 1951, the same year in which Einstein signed the photograph currently up for auction.

Other items featured in the auction include signed color photographs of NASA Apollo 11 mission crewmembers, the first spaceflight that landed men on the moon; individually signed vintage photographs of the first six cosmonauts; a photograph of Chang and Eng Bunker, the Siamese twin brothers whose condition and birthplace became the basis for the term Siamese twins; and a signed watercolor illustration of English author Beatrix Potter's first edition of "The Tale of Peter Rabbit" from 1902.

More information about the sale can be found on the International Autograph Auctions website.