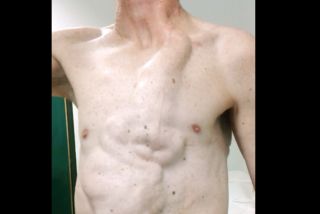 In this image, the man's reconstructed esophagus is visible beneath his skin.
(Image: © The New England Journal of Medicine ©2016)

Some men simply don't like the way they look without their shirt on. But one man in Germany who went to doctors with concerns about his appearance had a more unusual reason for wanting to avoid being seen bare chested, a new case report suggests.

The 60-year-old man went to see a surgeon because he was dissatisfied with the gnarled and bulging appearance of his chest more than 50 years after he had part of his esophagus — the tube that connects the back of the throat to the stomach — removed.

Back when he was just a 7-year-old boy, a portion of the man's esophagus was burned after he ingested an alkali substance, resulting in a completely narrowed section of this important passageway, according to the surgeons at the University of Freiburg in Germany, who published a report on the man's case Wednesday (April 20) in The New England Journal of Medicine.

He probably swallowed a type of substance called a caustic lye, such as bleach, which can eat away at the lining of the esophagus, said Dr. David Hackam, a surgeon-in-chief at the Johns Hopkins Children's Center in Baltimore, who was not involved in the man's case.

Back in the day, when this man underwent the original operation to bypass this damaged area, removing a part of the esophagus was considered a pretty aggressive surgery, Hackam said. The procedure would have involved removing the middle part of the esophagus and leaving the upper part behind, he said. [11 Surprising Facts about the Digestive System]

Then, surgeons would have taken a part of the man's intestine and moved it up into the neck region, using it to create a pouch and attaching it to the remaining part of the upper esophagus, Hackam said. Next, the doctors would have hooked up the lower end of the esophagus to the small intestine, he said.

By doing the procedure this way, the surgeons are basically rearranging the plumbing and making a pipe, Hackam told Live Science.

Over time — which, in this man's case, meant more than five decades — the section of the intestine that was placed into the man's neck grew, swelled and became twisted, Hackam explained. By age 60, the man's bare chest revealed the twists and turns of his remodeled esophagus and intestine, clearly visible under the surface of his skin.

This photograph is a very unusual, graphic and revealing look at his restructured intestine, Hackam said. "Doctors don't see this every day," he added. [16 Oddest Medical Cases]

"It's an interesting picture, and a good warning to doctors not to do this particular operation this way any longer," Hackam said. Nowadays, physicians generally use other treatments for a burned esophagus, such as using medicines that can help heal the lining, he said.

Even in cases requiring surgery, the kind of operation this man had as a young boy is not done much anymore. These days, surgeons are more likely to perform what's known as a "gastric pull-up" instead, Hackam said.

A gastric pull-up involves bringing up the stomach from the abdomen into the chest area, and attaching it to the remaining portion of the esophagus, Hackam said. But because the stomach is brought into the chest near the heart, it is a very difficult — and very risky — operation, he said.

The case report revealed that the man had cosmetic concerns about his previous surgery and didn't like its appearance. But the report also said that a test showed that he had no problems with swallowing.

The man was found to have a hernia, an area in which his small intestine was bulging through a weak spot in his abdominal wall, according to the case report. After his surgeon explained the risks and benefits of repairing the hernia, the man decided not to go through with this operation, the report said.