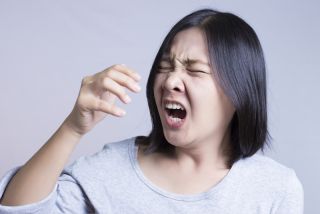 This woman clearly has a lot of irritants in her nose.
(Image: © CHAjAMP | Shutterstock.com )

Sometimes a sneeze is a solitary "Achoo!" Other times, sneezes come in twos or threes, leaving those in earshot wondering exactly when to sneak in a "bless you."

These multiple sneezes may be seem excessive, but they're actually helping people clear irritants out of their airways, said Dr. Jordan S. Josephson, a sinus specialist at Lenox Hill Hospital in New York City.

"Typically, you sneeze because you end up with foreign particles in your nose," Josephson told Live Science. "The sneeze is the way to get it out." [Ah-CHOO! 7 Tickling Facts About Sneezing]

For people who sneeze three times in quick succession, "one sneeze probably loosens it up, the second sneeze gets it to the front of the nose and the third sneeze gets it out," he said.

There are a number of irritants that can trigger a sneeze. Viral respiratory infections, such as the common cold, can bother the mucous membrane in your nose. So can cold air; allergens, such as pollen and pet dander; physical irritants, including smoke and pollution; and environmental particles, such as dust, mildew and mold, Live Science reported.

No matter what triggers your sneeze, be sure to cover your nose and mouth to prevent the spread of germs, said Josephson, author of "Sinus Relief Now: The Ground-Breaking 5-Step Program for Sinus, Allergy, and Asthma Sufferers" (TarcherPerigee, 2006).

He recommended washing your hands if you sneeze into them, and joked that sneezing into your elbow works, but that it makes "your shirt look like a handkerchief."

"Really the best way to do it is to sneeze into a tissue," Josephson said.