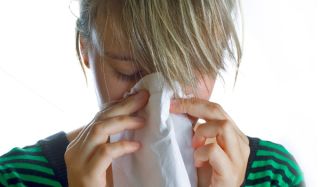 It starts with a tickle in the nose — a sneaking itch that quickly becomes a violent force of nature: the sneeze. One of your body's natural defense mechanisms, sneezing is a complex physiological process designed to rid the body of foreign invaders and protect the lungs and other internal organs from contamination.

Sneezing — or as it's known in the medical community, sternutation — occurs when the respiratory epithelium that lines the nose is irritated. Irritation of this mucus membrane stimulates the endings of the trigeminal (or fifth) cranial nerve, sending a message to the brain to activate the sneeze reflex.

And the sneeze reflex is, well, nothing to sneeze at. This coordinated effort between your respiratory, musculoskeletal and parasympathetic nervous systems results in an impressive feat — the expulsion of air from the body at speeds reaching 93 mph (150 kilometers per hour).

While viral respiratory infections (e.g., the common cold) can irritate your nose's mucus membrane and result in plenty of gooey sneezes, so, too, can a number of other factors. Some of the most common things that set people to achoo-ing include allergens (pollen or pet dander), physical irritants (smoke or pollution), common environmental particles (dust, mildew, mold) and cold air.

But there are also a number of other, much stranger factors that trigger the sneeze reflex. Did you know, for example, that some people sneeze whenever they tweeze their eyebrows?

And photic sneezing — sneezing induced by exposure to sunlight — is a condition that affects between 1 in 3 to 1 in 10 individuals (research into this phenomenon is still ongoing). "Snatiation" is something weirder still: sneezing triggered by a full stomach.

Sneezes can even be a bit scandalous. Some people sneeze when they reach orgasm. For others, just the thought of sex can set off the sneeze reflex. While the reason for these strange sneezing behaviors is not known, researchers have hypothesized that they may be linked to faulty wiring in the part of the brainstem known as the medulla oblongata, which controls the parasympathetic nervous system's responses to certain stimuli, including bright light, hunger and sexual arousal.