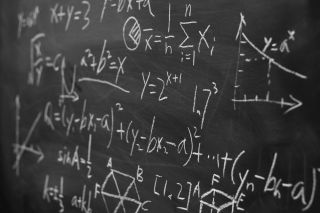 How your brain processes complex mathematical problems is very different from how it processes language.
(Image: © ChristianChan)

Albert Einstein once said that his mathematical genius had nothing to do with language: "Words and language, whether written or spoken, do not seem to play any part in my thought processes."

And now high-definition brain scans prove he had a point. The ways that the brain processes language and complex mathematical concepts are quite different, according to a new study.

The notion that humans first developed mathematical abilities as an offshoot of early forms of language has been a long-standing hypothesis, according to the study authors. And some studies have suggested that the way the brain wrangles abstract math concepts has more in common with language processing than it does with simple number recognition and formula computing. [3D Images: Exploring the Human Brain]

But this idea has opponents — including many mathematicians, the researchers noted — who argue that understanding complex math involves perception pathways that differ greatly from those that untangle words.

To find out which idea held true, researchers turned to a type of noninvasive scan called  fMRI (functional magnetic resonance imaging), which creates high-resolution images that can map changes in neural activity triggered by blood flow. In that way, researchers would be able to see which parts of the brain lit up during different types of tasks.

For the experiments in the study, the scientists selected 15 subjects who were trained mathematicians and 15 subjects who were well educated but did not specialize in math. The researchers posed a series of statements to each subject on a range of topics — math and nonmath — which participants were asked to identify as "true," "false" or "meaningless."

When both groups responded to statements on subjects that had nothing to do with math, the brain scans showed activity in the regions associated with language processing.

But when the mathematicians pondered and responded to statements relating to advanced mathematical concepts, certain regions of their brains — the prefrontal, parietal, and inferior temporal regions — lit up. Those brain regions also activated in nonmathematicians only when they were puzzling over numbers and formulas. During this activity, the researchers found, did not occur at all in brain regions linked to words.

According to the study's co-author Marie Amalric, their findings indicate that understanding math on a conceptual level uses the same neural networks that recognize numbers and space, rather than the networks that process general knowledge.

Amalric, a neuroscientist with the Cognitive Neuroimaging Unit at the NeuroSpin Center in France, told Live Science in an email that prior studies suggested that an early childhood ability to recognize numbers could possibly predict aptitude for performing more abstract mathematical reasoning later in life.

"Such applications are a bit far from our conclusions,"  Amalric said. "However, our findings are in accordance with previous conclusions showing that the number sense is a good predictor of further mathematical skills."

The study was published online today (April 11) in the journal Proceedings of the National Academy of Sciences.