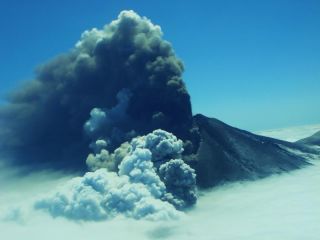 Alaska's Pavlof volcano erupts in 2013, shooting a plume of ash into the air. A steam plume from melting snow and ice can also be seen.
(Image: © Theo Chesley/ Alaska Volcano Observatory/ USGS)

The roar of a volcano erupting on a remote Alaska island reveals important details about the blast, such as its size and location, a new study reports.

Armed with this new information, scientists in Alaska are listening to volcanoes to better pinpoint eruption hazards.

"Sound waves are very good at telling you about how, when and where a volcano is erupting," said lead study author David Fee, a research assistant professor at the Alaska Volcano Observatory and Wilson Alaska Technical Center in Fairbanks.

The findings were published today (April 4) in the Bulletin of the Seismological Society of America. [Big Blasts: History's 10 Most Destructive Volcanoes]

Erupting volcanoes are often compared to thundering jet engines. The sound is loud enough to shake the ground nearby, similar to how a passing garbage truck may rattle windows in an apartment or a house. Seismometers placed near a volcano can detect this shaking, called ground-coupled airwaves, Fee told Live Science. Ground-coupled airwaves (GCAs) occur when an acoustic wave in the atmosphere impacts the Earth's surface. Meteors and nuclear explosions also trigger GCAs. The signals are fairly small compared with felt earthquakes, Fee said.

By looking at the sounds picked up by seismometers, the scientists can gather information that otherwise would not be available, Fee said. For instance, thick clouds may hide a volcano from the prying view of a satellite, but monitoring of sound and earthquakes can help determine whether or not volcanic activity is at the surface or only underground. Volcanoes unleash earthquakes and tremors before an eruption as lava and hot fluids push their way through underground fissures. The actual trembling produced by those sound waves starts only once the eruption begins.

"This study is a good example of using data beyond its initial, intended purpose," Fee said. "Due to the high number, remoteness and difficult logistics of the volcanoes we monitor, we often have less than ideal monitoring networks. In these cases, we use as many processing techniques as possible to help monitor and understand these volcanoes."

Knowing whether an eruption has started is crucial in southwest Alaska, because large ash clouds from volcanoes in the Aleutian Islands can affect international flight paths, as with the flights canceled when Pavlof volcano erupted in late March.

Pavlof volcano is one of the three fiery peaks where Fee and his colleagues tested their new technique. The other Alaskan volcanoes studied are Cleveland and Mount Veniaminof. During eruptions at Pavlof volcano in 2007 and 2013, the researchers were able to locate the source to within about 100 feet (within tens of meters).

The Alaska Volcano Observatory (AVO) already monitors some volcanoes in the state with infrasound — low-frequency sound waves outside of the range of human hearing.  The AVO has now added sound-wave-monitoring to its arsenal of techniques, the researchers reported.

"We definitely plan on extending this type of monitoring," Fee said.

However, Alaska's volcanoes continue to hold surprises, even at closely monitored volcanoes such as Pavlof. The most recent eruption of Pavlof, in March 2016, started with essentially no warning.

"The seismicity started right about the same time the eruption began, which is unusual for a volcano," Fee said.