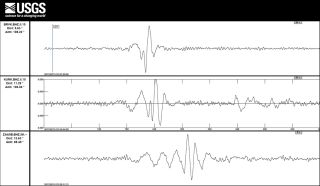 A meteor explosion in the skies above Russia this morning also walloped the Earth, triggering shaking as strong as an earthquake, the U.S. Geological Survey (USGS) reports.

Today's early morning blast, centered on the Chelyabinsk region, sent massive tremors through the ground, which were recorded on seismic monitoring instruments around the world.

Initial reports pegged the explosion as similar to a magnitude 2.7 shaker, according a seismograph released by the USGS. For comparison, the 1908 Tunguska meteor blast's shock waves, which flattened 80 million trees in Siberia, produced the equivalent of an estimated 5.0 temblor.

"When you have an explosion in the air, it shakes the ground, and we see it on the seismographs," explained Paul Caruso, a geophysicist at the USGS National Earthquake Information Center in Denver, Colo., which reported the meteor-related tremors. "It's not an earthquake, and it looks very different from the usual earthquake seismogram," he told OurAmazingPlanet.

Few meteor explosions have actually been recorded on seismographs, though, Caruso said. "We've been looking at it all morning," he added.

The meteor reportedly injured hundreds of people and damaged hundreds of buildings when it exploded in a massive blast Friday morning (Feb. 15).

Most of the injured were reportedly hurt by falling glass caused by the blast, and many have been hospitalized. In addition, an estimated 297 buildings suffered damage, including six hospitals and 12 schools, according to translations of updates by the Russian Emergency Ministry.

Scientists think a meteoroid entered the atmosphere above Russia's southern Chelyabinsk region, where it exploded and broke up into fragments scattered across three regions of Russia and Kazakhstan, according to news reports. [Photos of Russia's Meteor Fireball Blast]

The Russian meteor probably had nothing to do with the upcoming close Earth approach of asteroid 2013 DA14, which is due to make its closest approach to the Earth at 2:24 p.m. ET, Don Yeomans, head of NASA's Near-Earth Object Program, told SPACE.com. The Russian meteor's trail did not travel south to north as the asteroid will.