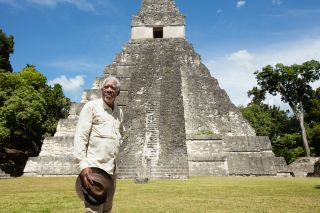 People curious about the history, culture and beliefs surrounding the world's major religions can take a whirlwind tour of all of the above in a new TV miniseries called "The Story of God with Morgan Freeman."

Freeman invites the public to watch as he travels the world to learn about how religion has shaped our societies, as well as our interpretations of life itself. The six-part series premieres Sunday (April 3) on the National Geographic Channel.

"Over the past few months, I’ve traveled to nearly 20 cities in seven different countries on a personal journey to find answers to the big mysteries of faith," Freeman said in a statement. "I’ve sung the call to prayer at a mosque in Cairo, taken meditation lessons from the Buddhist leader of the oldest line of reincarnating Lamas, discussed Galileo with the head of the Papal Academy of Sciences, and explored the first instructions for the afterlife rendered in hieroglyphs inside the pyramids." [Proof of Jesus Christ? 7 Pieces of Evidence Debated]

The idea for the miniseries took root when Freeman was visiting Istanbul about six years ago with film producer Lori McCreary, who helped Freeman found the Revelations Entertainment production company. The two were visiting the Hagia Sophia, which was built in the sixth century A.D. The building served as a church until 1453, when the Ottomans conquered Istanbul and changed it into a mosque. However, the Hagia Sophia has been a museum since 1935.

Freeman and McCreary noticed that many of the museum's frescoes had portrayals of biblical stories associated with Judaism and Christianity. They wondered why the artwork was still there, given that the Hagia Sophia was last a mosque, and asked a tour guide about it.

"The man said no, that Muslims celebrated these stories, too," Freeman said. "And we were both quite surprised that we didn’t know how much history and narrative the three faiths have in common."

After that, Revelations Entertainment teamed up with the National Geographic Channel to produce a documentary about God, "one that focused on telling the stories from myriad perspectives," Freeman said. They asked Freeman, who has played God in several Hollywood films, including "Bruce Almighty," to host it. He readily agreed.

In the miniseries, Freeman delves into religious history. For instance, he speaks with Salima Ikram, a professor of Egyptology at The American University in Cairo, who explains how religions have historically adapted to win the hearts and minds of new followers.

"[Newer religions] can't always go around bashing old beliefs completely," Ikram said in a statement. "We saw how well that worked with Akhenaten, the pharaoh who tried to get Egyptians to become monotheistic. It didn't go over well. So there is this idea of taking things in, adapting them, changing them and evolving into what one has today — whether it's Christianity or Judaism or Islam." [Creationism vs. Evolution: 6 Big Battles]

In another episode, Freeman meets with Valerie Higgins, an associate professor of archaeology at the American University of Rome. The Roman pagans didn't have a written text of their beliefs, like the Quran or the Bible, so they interpreted the will of their gods in other ways.

"They used nature as an indication, so, for example, the flight of birds or episodes of thunder and lightning could be interpreted as messages from the gods," Higgins said. "The problem was always how to interpret these signs, and for this they had a special class of priests, called 'augurs.' These priests had a lot of power; for example, they could stop meetings of the senate, so for this reason the posts were usually held by members of elite families."

Freeman even dives into brain science. In the "Who is God" episode, he gets his brain scanned at Jefferson Hospital in Philadelphia as part of a study that examines how the brain is affected by religious practices, such as prayer or meditation.

The series will air Sundays at 9 p.m. EDT/ 8 p.m. CDT (or check local listings) according to the following schedule.

Editor's Note: This story was updated to fix the dates regarding the transformation of the Hagia Sophia from a church into a mosque.