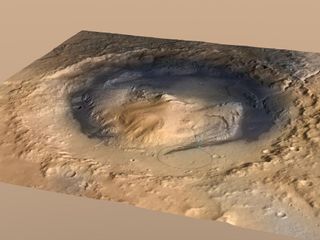 A 3-mile-high (4.8 kilometers) mound called Mount Sharp sits at the center of Gale Crater on Mars. (The circle shows the landing spot of the Mars rover Curiosity, with its path marked with a blue line.)
(Image: © NASA/JPL)

Mysterious mile-high mounds on Mars evolved from layer-cake craters, but for four decades, scientists have puzzled over how. By mimicking Martian winds in the lab, scientists think they have solved the mystery.

And they've generated a series of rainbow-colored images of the process to boot.

The Viking spacecraft first spotted these sandy mounds in the 1970s, and more recently scientists have found that at least one of these mounds — one that's more than 3 miles (4.8 kilometers) high, located inside Gale Crater — is made of layered sedimentary rock. The bottom of the crater was filled with sediment carried by water that once flowed on Mars, while the surface sediments were carried by wind.

Now, with a wind tunnel and a mini, lab-made crater, scientists think they know how those filled craters transformed into lofty mounds. Scientists placed the little damp sand-filled crater, which was about 12 inches wide and 1.6 inches deep (30 by 4 centimeters), into a wind tunnel. As the "Martian winds" blew, the grounded scientists measured the sand in the crater until it all blew away.

The result? The windblown mini model first formed a crescent-shaped moat that, over time, got deeper and wider, and ultimately all that was left was a mound. With more time in the wind tunnel, even that mound blew away.

"We went from a filled-crater layer cake to this mounded shape that we see today," lead study author Mackenzie Day, a graduate student at the University of Texas at Austin Jackson School of Geosciences, said in a statement.

A computer simulation of the process also revealed how the wind would have blown through the crater at different stages of its sandy "life."

The research is detailed in the March 31 issue of the journal Geophysical Research Letters.