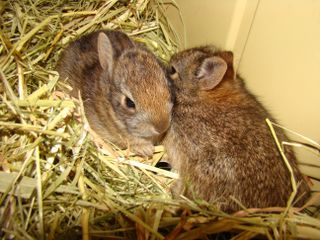 If a rabbit or a hare were to hop across your path this Easter, would you be able to tell the difference?

Both are furry and capable of pulverizing a vegetable garden, but they have several key differences. Here are some tips that will transform you into a bunny expert come Easter time.

Rabbits and hares are closely related, said Mary Dawson, curator emeritus of vertebrate paleontology at the Carnegie Museum of Natural History in Pittsburgh. They belong to the same order (Lagomorpha) and family (Leporidae), but they have separate genuses. [In Photos: America's Favorite Pets]

The 30 or so species of hares fit into just one genus (Lepus), whereas rabbits branch out into 10 genuses, including the North American genus Sylvilagus, more commonly known as cottontails. There are also about 30 species of rabbits, including the European rabbit (Oryctolagus cuniculus), which is often bred as a pet.

In general, rabbits are smaller than hares. Rabbits usually live in areas with forests or shrubs, and they dig underground burrows or make nests in small depressions in the ground, Dawson told Live Science. Baby rabbits are called kittens or kits.

"They are born not being able to see," Dawson said. "Their eyes are closed, and they don't have hair."

In contrast, hares do not burrow underground. They usually live in open areas, such as deserts or prairies, and have their young in simple nests on the ground. Hare babies (known as leverets) are born with fur and open eyes. [Photos: World's Cutest Baby Wild Animals]

"They're ready to go," Dawson said. "They're much better able to take care of themselves [than rabbit kittens are]."

Hares would also kick the tails of rabbits in an Easter hop, hands down. Because they live in open areas, hares rely on speed to escape from predators, as opposed to rabbits such as cottontails, which often dive into their nest holes or hide under brush when danger is near, said Lou Perrotti, director of Conservation Programs at Roger Williams Park Zoo in Providence, Rhode Island.

Some hares, such as the snowshoe hare (Lepus americanus), change color with the seasons. In the winter, these animals have white fur to blend in with the snow, and in the summer they turn brown, likely for camouflage reasons, Perrotti said.

Despite the differences between rabbits and hares, the animals diverged evolutionarily only about 1.5 million to 1 million years ago, Dawson said. What's more, both look remarkably similar to their ancestors.

The oldest fossil rabbit, discovered in India, is about 53 million years old. It was about the size of a hamster and weighed less than half a pound (less than 100 grams), Live Science reported.

The experts offered one last tip about rabbits and hares: Don't rely on their names to tell them apart. Jackrabbits are actually hares, and the hispid hare (Caprolagus hispidus) is a rabbit native to Nepal and India. What's more, the mouse hare is in fact a pika, the only other mammal in the order Lagomorpha, Dawson said. [7 Animals with Misleading Names]

Pikas are small, furry animals that belong to the family Ochotonidae. They live in the mountains of western North America and in parts of Eurasia. Some people call these animals "whistling hares" because they make a high whistling sound when they feel threatened, Dawson said.

But pikas look very different from rabbits and hares. They have round bodies and ears, and don't have a visible tail — much unlike their lagomorph cousins, the National Park Service said.