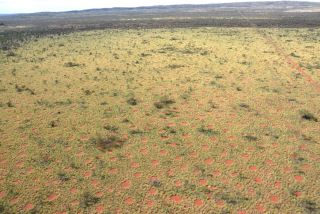 Fairy circles, mysterious barren patches once known only in Namibia, have been discovered in Australia. And the discovery might help resolve the controversy over why fairy circles exist.

Fairy circles are regular patches of barren dirt arranged in a repeating hexagonal pattern. They've long been a flashpoint of controversy in the African country of Namibia, where researchers have postulated that they're the work of termites, that they're definitely not the work of termites, that they're caused by toxic underground gases or uneven distribution of soil nutrients. Researchers have even found that the pattern of Namibian fairy circles shares an uncanny resemblance to the pattern of skin cell organization.

Now, the Australian discovery of fairy circles bolsters another theory, according to ecological modeler Stephan Getzin of the Helmholtz Center for Environmental Research in Germany. The fairy circles seem to be a self-perpetuating pattern caused by the competition for scarce water. [See Photos of the Fairy Circles Discovered in Australian Outback]

Getzin and his team had previously championed the water theory, arguing that fairy circles occur only in certain arid regions and that grasses often form strange striped or twisty growth patterns in areas where water is scarce.

The new discovery of fairy circles in Australia came courtesy of an Australian colleague of Getzin's, who sent Getzin an aerial photograph of the dry landscape around Newman, a small town in Western Australia's Pilbara region. This is flat, sunbaked terrain, where soil surface temperatures can reach a sizzling 167 degrees Fahrenheit (75 degrees Celsius), Getzin told Live Science.

The harsh conditions may be the reason fairy circles spread, Getzin and his colleagues reported Monday (March 14) in the journal Proceedings of the National Academy of Sciences. In Australia, there was no correlation between termite or ant activity with the number of fairy circles or their size. And the termite and ant nests that were visible tended to be spaced in irregular clusters, while the fairy circles were remarkable regular.

The researchers methodically measured the fairy circles in three areas near Newman. They took soil samples, measured temperature and tracked how water infiltrated the soil. They analyzed aerial photographs and created computer simulations of the landscape.

The Australian fairy circles occur on sandy soil topped with a hard clay crust, they found. Water essentially can't penetrate this crust, and instead runs off toward spots where plants have managed to take root. It's a beneficial feedback circle for those plants that survive on the edges of the circles, because they catch all the rainwater that rolls off the barren soil. Meanwhile, the barren spots stay bare because no small seedling can hope to take root there — the center of the circles are simply too hot and too hard-packed. Getzin and his colleagues argue that a similar situation occurs in Namibia, though the soil there drains water more efficiently and the uneven flow takes place underground instead of on the surface.

"They are strongly confined to a narrow climatic envelope," based on rainfall, he told Live Science. "Hence, they occur not easily everywhere over huge areas, but if conditions are right, they could be found somewhere else," he said.

The new study is unlikely to completely put the controversy over the cause of fairy circles to bed, Getzin said. But it's a check in the water-scarcity column and a blow to the termite theories.

"I think [we] have just made an important step forward by showing that identical fairy circles to the Namibian ones can be found around the globe, without correlation to termite activity," he said.