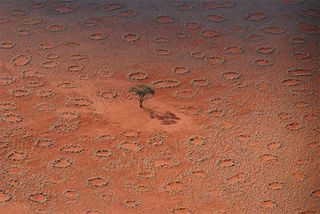 The "artists" behind bizarre, barren, grassless rings dotting the desert of Southwest Africa have been found lurking right at scientists' feet: termites.

Known as fairy circles, these patches crop up in regular patterns along a narrow strip of the Namib Desert between mid-Angola and northwestern South Africa, and can persist for decades. The cause of these desert pockmarks has been widely debated, but a species of sand termite, Psammotermes allocerus, could be behind the mysterious dirt rings, suggests a study published today (March 28) in the journal Science.

Scientists have offered many ideas about the circles' origin, ranging from "self-organizing vegetation dynamics" to carnivorous ants. Termites have been proposed before, but there wasn't much evidence to support that theory.

While studying the strange patterns, biologist Norbert Juergens of the University of Hamburg noticed that wherever he found the dirt patches (the barren centers inside fairy circles), he also found sand termites. [See Photos of the Bizarre Fairy Circles]

Juergens measured the water content of the soil in the circles from 2006 to 2012. More than 2 inches (5 centimeters) of water was stored in the top 39 inches (100 cm) of soil, even during the driest period of the year, Juergens found. The soil humidity below about 16 inches (40 cm) was 5 percent or more over a four-year stretch.

Without grass to absorb rainwater and then release it back into the air via evaporation, any water available would collect in the porous, sandy soil, Juergens proposed. That water supply could be enough to keep the termites alive and active during the harsh dry season, while letting the grass survive at the circles' rims.

Juergens conducted surveys of the organisms found at fairy circles. The sand termite was the only creature he found consistently at the majority of patches. He also discovered that most patches contained layers of cemented sand, foraged plant material and underground tunnels — telltale signs of sand termites.

The scientist found a few other termite species, as well as three ant species, at fairy circles in areas that get rain during the summer or during the winter, but not at all the sites he studied.

The termite behavior provides an example of "ecosystem engineering," Juergens wrote in the Science paper. The insects appear to be feeding on the grass roots to create the characteristic rings, the study suggests. As to why the termites would create circular-shaped patches, Juergens doesn't say.

"The paper is a useful addition to debating the origin of the fairy circles," chemist Yvette Naude of the University of Pretoria, South Africa, who was not involved in the study, told LiveScience in an email. But, Naude added, the study "does not address the key question as to what is the primary factor that causes sudden plant mortality, i.e. the birth of a fairy circle."

The soil in fairy circles seems to be altered so that plants can't survive, whereas termites usually enrich soil, making it more hospitable to plants, she said. (Juergens actually thinks the termites chew up the plant roots, and that's what leads to the barren patches.)

It is possible the termites don't cause the fairy circles, but merely live in them. However, Juergens found the insects were present even during the early stages of patch formation, before the grass had died off on the surface. Over the termites' lifetime, they munch on the grassy borders and gradually widen the circles.