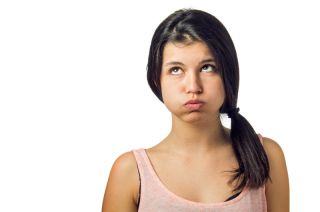 How many times per day do you sigh? Chances are, the number in your head is off by a factor of about 10, according to a new study.

People actually sigh about 12 times every hour, or once every five minutes, researchers found. But these audible exhalations don't necessarily signal tiredness or exasperation. Rather, physiological sighs are vital to keeping the lungs functioning properly, the scientists said.

Now, researchers from the University of California, Los Angeles (UCLA), and Stanford University have identified the source of sighing, which they classify as a life-sustaining reflex that prevents air sacs located in the lungs, called alveoli, from collapsing. [15 Weird Things Humans Do Every Day, and Why]

"A human lung has as much surface area as a tennis court, and so that's all folded inside your chest," study co-author Jack Feldman, a professor of neurobiology at UCLA, told Live Science. "The way that nature did it is that there's 500 million little air sacs called alveoli. And each alveolus is a little sphere, about 0.2 millimeters [0.008 inches] in diameter."

These tiny, round sacs help ensure that sufficient amounts of oxygen can pass easily into the blood through the lung membranes, and Feldman described them as being similar to "wet balloons."

"Did you ever try blowing up a wet balloon? It's very difficult, because the water on the inside sticks together," he said. "This is what happens when an alveolus collapses … and whenever they collapse, that surface area gets taken out of the ability to exchange gas."

In other words, if humans weren't able to sigh, the alveoli wouldn't be able to reinflate, and the lungs would fail. Feldman said the only way to pop alveoli open again is to take a deep breath, which humans tend to do every 5 minutes.

"In the early days of using mechanical ventilation like iron lungs, people were inflated just with normal lung volumes, and a lot of them died because their alveoli collapsed," Feldman said. "Now, when you see someone getting respiratory therapy on a ventilator, you'll notice that every couple of minutes, there's a huge breath that is superimposed, and that is playing the role of a sigh."

So, a sigh is like a double breath, Feldman said, and it doesn't necessarily have to be a loud exhale like you might do when you're huffing or expressing relief. [Gasp! 11 Surprising Facts About the Respiratory System]

However, Feldman said that sighs are actually associated with emotions in a different way, because sigh rates tend to go up when someone is stressed. One of the things that happen to a body under stress is that the brain releases molecules known as peptides, which are protein subunits. Some of these are called bombesin-related peptides.

Bombesin isn't present in mammals, the researchers said, and is actually a toxin found in the skin of a European fire-bellied toad. However, mammals have receptors for it, and previous research found that peptides called  neuromedin B (NMB) and gastrin-releasing peptide (GRP) are the equivalent in mammals, including humans.

Feldman's own previous research identified that injecting bombesin into an area of the brain called the pre-Bötzinger complex increased the sigh rate of rats from 25 times an hour to about 400, while their breathing rate stayed more or less the same.

In comparison, when a special toxin that can kill cells that express the receptor for bombesin was injected into the same area, the animals stopped sighing altogether but continued to breathe normally otherwise, the researchers said.

In the new study, Feldman collaborated with Mark Krasnow, a professor of biochemistry at Stanford University, and his research team. Krasnow had been supervising a Stanford student named Kevin Yackle, who was inspired by a talk Feldman gave about how the brain controls breathing. Yackle went to Krasnow with his idea to go through an online database of 14,000 molecules of the brain and use it as a way of trying to piece together how the nervous system works.

Krasnow and his team were keen to collaborate with Feldman when they realized that he had been simultaneously researching bombesin-related peptides. The Stanford team had identified two molecules, NMB and GRP, that were highly concentrated in regions of the brain that are important for breathing but are found almost nowhere else in the brain. At the time, the researchers didn't know what these molecules were for, but by teaming up with Feldman, the scientists were able to analyze around 14,000 gene expression patterns in the brain cells of mice. They identify around 200 neurons in the mouse brain stem that are responsible for producing and releasing bombesinlike peptides.

"We identified about 400 neurons [in] total that were key for triggering sighs," Feldman said. "That's not a lot of neurons to be involved in a fundamental behavior."

The researchers think their findings could offer insight into other parts of the nervous system and into the mechanisms that may underlie more complex behaviors in humans.

But when it comes to researching the nervous system, it can be a bit like learning a language, Feldman said.

"It's a little bit like saying, 'If you want to understand the English language, do you start with Shakespeare, or [do] you start with Dr. Seuss?" he said. "The vocabulary is simpler, the number of words [is] simpler, but there are a lot of fundamental principles involved in Dr. Seuss that are going to tell us a lot about Shakespeare."

And when it comes to learning Shakespeare, "we have to increase the vocabulary, the sophistication … but it builds on a foundation," he added.

The research could have potential applications for the development of medicine to treat certain conditions, the researchers said. With some anxiety disorders, for instance, people may sigh too much, which can be debilitating. And some people don't sigh enough, which can lead to breathing problems and compromised lung function, the scientists said.

Feldman said he wants to do further research on what individual neurons are doing when a person sighs, and he is interested in breaking down how these neurons are organized.

"An immediate question is, when you apply these peptides in normal inspiratory, bursts become a sigh; a double burst," he said. "Why? What's happening to the neurons? What's happening to the circuit? You don't know. That's a fundamentally important question, not just for sighs but for understanding how the nervous system is transforming information and processing signals."

The research was published online Feb. 8 in the journal Nature.