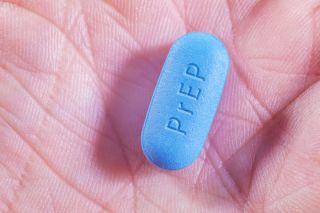 In the first documented case of its kind, a man taking an effective antiviral medication still contracted a drug-resistant strain of human immunodeficiency virus (HIV), a new report finds.

The 43-year-old man in Canada was taking Truvada, the medication approved by the Food and Drug Administration (FDA) to reduce HIV risk among HIV-negative people, according to the FDA.

The case suggests that people taking Truvada can still get HIV if they're exposed to a strain of the virus that is resistant to the two antiviral medications contained in the pills — tenofovir and emtricitabine, the researchers said. [7 Devastating Infectious Diseases]

The man had been taking Truvada daily for the past two years. Normally, HIV-negative people who are at high risk of contracting HIV, including those who have sex with HIV-positive partners, take Truvada on a daily basis to lower their chances of getting the virus, according to the FDA.

The man, who reported that he has sex with men, got tested for HIV, according to the report. The test showed that he was HIV-positive, the researchers said, according to the February report, presented at the 2016 Conference on Retroviruses and Opportunistic Infections (CROI) in Boston in February.

A genetic analysis of the viral strain the man was infected with showed that he had likely acquired it recently, and from a single source, the report found. Moreover, tests showed that it was multidrug-resistant.

The case is concerning, but likely rare, experts told Poz, a news outlet that covers HIV and AIDS.

According to the Centers for Disease Control and Prevention (CDC), Truvada can reduce by 92 percent the risk of HIV infection in people who are at high risk of contracting the virus. The drug is more effective when it is taken consistently and used with other HIV-prevention methods, such as condoms.

Two large clinical trials of Truvada show that it lowered people's HIV risk substantially, according to the FDA. In one trial, of about 2,500 HIV-negative gay and bisexual men and transgender women, Truvada lowered HIV risk by 42 percent. In another study of 4,800 heterosexual couples in which only one was HIV-positive, it reduced the risk of HIV infection in the HIV-negative partner by 75 percent.

Although the man's HIV strain is resistant to multiple drugs, doctors have still found a way to treat him. The man is on a regimen of other drugs, including dolutegravir (brand name Tivicay), darunavir/cobicistat (Prezcobix) and rilpivirine (Edurant), and has "a fully suppressed viral load," according to Poz.