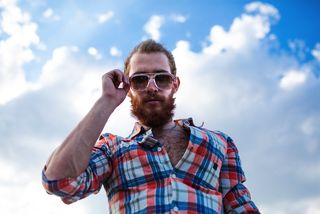 A full, bushy beard is a sought-after trait for many men.
(Image: © Janna Bantan | Shutterstock.com)

Some people have thin arched eyebrows, while others sport a furry unibrow. Some men have a 2 o'clock shadow, while others have been working on their facial sprouts for years, to no avail.

Now, a new genetic analysis reveals the roots of this hairy variation. The study also found the genetic underpinnings of curly versus stick-straight hair, as well as the tendencies to become bald or go grey.

"We already know several genes involved in balding and hair color but this is the first time a gene for greying has been identified in humans, as well as other genes influencing hair shape and density," Kaustubh Adhikari, the lead author of the new study and a biologist at the University College London, said in a statement.

The findings could have implications for forensics, allowing police to use genetic data to build a likely portrait of suspects and victims from just a bit of hair left at a crime scene, the researchers said. [10 Things You Didn't Know About You]

To untangle the genetics of hairiness, the researchers analyzed the DNA of 6,630 people in Latin America, who had a mix of Caucasian, African American and Native American ancestry.

The team found genes tied to having a unibrow, and others linked to having bushy, Brooke Shields-style eyebrows.

The genetic analysis also revealed why some people seem to sport thick, luxuriant heads of hair but have thin eyebrows or smooth baby faces all their lives, as well as why humans have such a wide variety of hair appearances. It turned out that separate genes affect hair type, beard thickness, eyebrow thickness and unibrow presence, the researchers reported today (March 1) in the journal Nature Communications. (Only men, however, were tested for genetic underpinnings of beard thickness and the presence of a unibrow.)

In addition, the researchers found that this cornucopia of hair types, textures and traits was probably not just a random accident. Instead, people's sexual preferences for long, straight locks, hairless faces or silver foxes may have driven the changes. But it's also possible that the genes that code for these traits evolved because they also code for other, as-yet-unknown traits that provided advantages in humans' ancestral environments, the researchers said.

"It has long been speculated that hair features could have been influenced by some form of selection, such as natural or sexual selection, and we found statistical evidence in the genome supporting that view," Adhikari said. "The genes we have identified are unlikely to work in isolation to cause greying or straight hair, or thick eyebrows, but have a role to play along with many other factors yet to be identified."