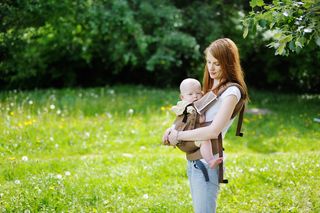 When it comes to losing the baby weight, experts agree that although eating healthy is the most important thing to do, it's also essential for moms to get moving.

But with a new bundle of joy, finding the time to exercise can be challenging. And getting to the gym? Downright impossible.

But postpartum physical activity doesn't have to drain your time — here are four tips to get back in action after having a baby. [The Best Ways to Lose Weight After Pregnancy]

Get a head start: Exercise during pregnancy

Gone are the days when doctors commonly recommended bed rest for pregnant women. Many studies have shown that being active during pregnancy can have a number of health benefits and help a woman get back into shape after giving birth, according to the American College of Obstetricians and Gynecologists.

For women who have no medical or obstetric complications during their pregnancy, getting at least 30 minutes of exercise most, if not all, days of the week is recommended, said Dr. Jacinda Nicklas, an assistant professor of internal medicine at the University of Colorado School of Medicine.

Brisk walking is one good way to get this exercise in, Nicklas told Live Science. But any activity that has a risk of falling should be avoided, she said.

After you deliver, check with your doc

It's always important for women to check with their obstetricians before resuming physical activity after giving birth.

Although women can usually start walking for exercise fairly soon after giving birth (whether they give birth vaginally or have aC-section), they should check with their obstetrician before starting more vigorous activity or lifting weights, Nicklas said.

And remember to ease into exercise.

During pregnancy, hormonal changes cause the tendons and ligaments all over a woman's body to loosen in order to make childbirth easier, said Cheryl Lovelady, a professor of nutrition at the University of North Carolina at Greensboro.

After pregnancy, those hormones gradually decrease. But in the beginning, the tendons and ligaments are still loose, so twists and sprains could happen easily. It's recommended that women start at a low level of exercise and build up slowly, Lovelady told Live Science.

A woman doesn't have to walk 3 miles (5 kilometers) on her first day after giving birth, Rasmussen said.

Women should take care of themselves and recover from delivery, but they should try to get moving just a little every day, she told Live Science.

And, if a woman can carry her baby into a doctor's appointment after a few days, she can certainly go out for a walk, Rasmussen added.

Lace up your walking shoes

All of the experts we spoke with agreed that walking is a great way for new moms to get exercise.

Walking is an exercise that easily can be included in a woman's day, and as with other physical activities, the duration and intensity can be built up over time, said Paige van der Pligt, a researcher at the Center for Physical Activity and Nutrition Research at Deakin University in Australia.

In one study of overweight and obese postpartum women, co-authored by Lovelady, the researchers instructed the women to start off slowly, with a 5-minute warm-up, and then to walk briskly enough to keep their heart rate in the target heart-rate zone of 60 to 80 percent of their maximum heart rate. Then, the women did a 5-minute cooldown, Lovelady said.

Eventually, the women built up to walking for 45 minutes a day, five days a week, with their heart rates in their target zone, she said. This shows that walking is intense enough to get a woman's heart rate up, and is good exercise even when built up slowly over time.

In addition, the ease of the activity is a major selling point.

There are so many different kinds of ways to carry a baby or push a baby in a stroller, giving women plenty of options, Rasmussen said.

With a new baby, "it can be really challenging for new moms to do anything that's focused on themselves, especially at that time in life," Nicklas said.

Lovelady agreed. Time is limited for new moms, she said. And for exercises other than walking, finding someone to watch the baby adds another layer of stress, she said. It's often easiest just to take the baby out in the stroller, she said.

Van der Pligt added that walking can be an important social activity for new moms who choose to walk with other mothers.

"Social support is important for new mothers and can help increase motivation and enjoyment," she said.

And exercise can make things easier in the long run.

A new baby means a lot of extra work, Rasmussen said. And the sooner a new mom gets moving at a level that feels comfortable, the easier it will be, she said.