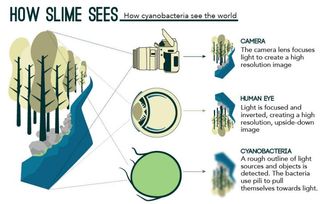 A new study reveals how tiny cyanobacteria sense and move towards light. It turns out that each teensy organism acts as a miniature lens that gathers and focuses light, similar to the way a human eye or a camera works.
(Image: © eLife)

Slimy microbes called cyanobacteria use their teensy bodies as lenses to collect light and "see," before growing little legs to inch toward those rays, new research suggests.

That means the basic workings of these miniature light collectors may not be so different from those of cameras or the human eye, the researchers say.

"The idea that bacteria can see their world in basically the same way that we do is pretty exciting," study lead author Conrad Mullineaux, a microbiologist at the Queen Mary University of London, said in a statement. "Our observation that bacteria are optical objects is pretty obvious with hindsight, but we never thought of it until we saw it. And no one else noticed it before either, despite the fact that scientists have been looking at bacteria under microscopes for the last 340 years." [Watch Cyanobacteria 'See' With Their Tiny Eyeball Bodies]

Cyanobacteria, or blue-green algae, are some of the most ancient life-forms on the planet. The single-celled bacteria first winked into existence about 2.7 billion years ago, and were among the earliest organisms to use photosynthesis, harnessing the sun's energy to produce oxygen from carbon dioxide and water.

But in order to gather energy from the sun, cyanobacteria must have a way to sense light, researchers reasoned. Past studies showed that bacteria have simple light receptors, and that they do move toward light — a process known as phototaxis.

Move toward the light

But it wasn't exactly clear how these bacteria were sensing the light. To get a better picture, Mullineaux and his colleagues looked at the Synechocystis genus of cyanobacteria — a green, spherical bacteria just 0.003 millimeters in diameter (about the width of a single strand of spider silk), which often forms a slimy film in freshwater lakes.

The team placed the pond scum on microscope slides and watched the microbes swim with different lighting conditions. In one setup, they used a light diffuser to create a gradient of more intense light from one side of the slide to the other; the diffuser scattered light rays so that they came from every which way.

In a second setup, the light came from one side of the slide, and in the third setup, the researchers used two different light sources placed on two adjacent sides of the slide.

When the researchers placed the bacteria in the light gradient, the bacterial movement was random. However, when the bacteria were exposed to light from one side, they migrated toward that light. In the setup with two light sources, at both ends of the slide, the bacteria moved to a spot in between the two. In essence, the slimy, single-celled creatures were somehow sensing the direction the light was coming from.

The team also found that soon after being illuminated, the blue-green algae grew little tentacles called pili, which they attached to a surface and then retracted to inch toward the light source.

"These images reveal that each cell acts as a microscopic spherical lens, focusing an intense light spot close to the opposite side of the cell from the light source and the direction of movement," the researchers wrote in the Feb. 9 issue of the journal eLife. This pinging of light then spurred the bacteria to move toward the light.

To prove that the bacteria were acting as tiny eyes, the team spliced a gene into the bacteria that produced a fluorescent dye throughout a cell layer, called the periplasm, that encircled the bacteria and sits just inside the outer cell membrane. When the team hit the cyanobacteria with light, spots on the periplasm opposite to the light source glowed green, proving that light hitting the front of a cell was bent, or refracted, and sent to the opposite side.

This process isn't too different from what goes on in the human eyeball, where light shines through the cornea and is then focused toward the back of the eye, onto the retina. A cyanobacterium, however, is 500 million times smaller than the human eye, and the algae likely view only the blurry outlines of objects that the human eye could see clearly, the researchers said.

"The physical principles for the sensing of light by bacteria and the far more complex vision in animals are similar, but the biological structures are different," co-author Annegret Wilde, a researcher at the University of Freiburg in Germany, said in the statement.